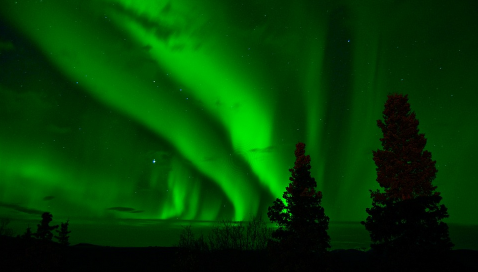 The polar glow is a generic name for light phenomena occurring in high atmospheres at altitudes from 80 to 100 km, most often around 100 km (in the ionosphere - a region of high concentration of ions and free electrons), sometimes reaching hundreds of kilometers. Commonly occurring in polar regions (southern glow - aurora australis, northern glow - aurora borealis), while in medium latitudes and especially in the tropics only exceptionally.
In the sun, sunspots are created by the inequalities in the magnetic field. These spots will form a massive protrusion (eruption). A cloud of solar wind particles made up of protons, electrons, and alpha particles (the plasmoid) flies through the universe (at a speed of 0,1% of the speed of light), and if it encounters the Earth's magnetic field on its path, the field will most reflect it into space, capture and rotate the spirals towards the magnetic poles of the Earth. There, the solar wind interacts with the atmosphere, creating a polar glow.
The solar wind, which is released in large quantities during solar eruptions caused by inequalities in the magnetic field of the Sun, and the Earth's magnetic field are two major factors for the emergence of the Arctic glow.

Close-ups of the Sun

Today, in Norway, there is a nice polar glow.

Along 2 hours back, beautiful polar glow over Norway

Today's good conditions and great predictions for the next three hours of polar glow can be expected to be Kp5-Kp6.

In Norway, once again, they launched a camera where the polar glow can be observed!

The polar glow is not here, but the beautiful white night in Norway - a fascinating sight!