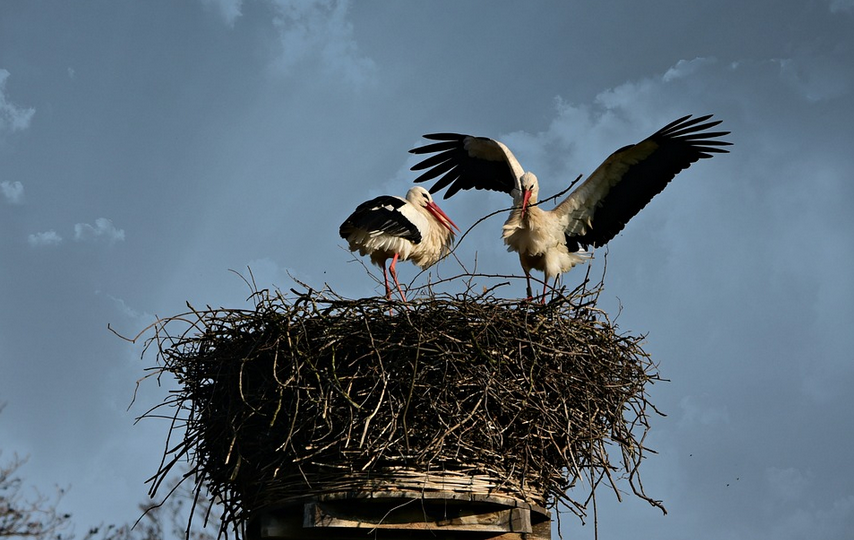 The stork's nest in Bohuslavice near Trutnov is located on an unused octagonal chimney at the KARA site at a height of about 31 meters above the ground, 400 meters above sea level, 70 meters from the Upa River.
In the autumn of 2018 (after the storks departed), HD Internet sro placed a webcam on the chimney, enabling continuous nesting and live video recording on YouTube. Since 2013, information on life on the nest has been transmitted to the birds.cz website by Mrs. Irena Najmanová. The nest has always been occupied since 2014 and the nesting couple has always brought out storks: in 2014 two storks, 2015 one stork, 2016 two storks, 2017 three storks, 2018 three storks and in 2019 four storks. In 2018 and 2019 the same female nested on the chimney.
On December 19.12.2019, 4, a temporary camera holder was replaced on the chimney with a special, custom-made camera holder and a new camera with 4K resolution UVC GXNUMX-PRO was added. A plate was welded to the top of the mast to prevent the storks from sitting directly on the web camera bodies.
The cameras have an infrared illumination at night (with remote control of intensity), which is invisible to humans and animals and therefore does not disturb them.
At the same time, it is possible to remotely adjust the zoom (zoom) of both webcams so that it is possible to watch the details of what is happening on the nest. Transmission is provided by HD internet sro
You can find more detailed information on the website of the operators.

About the nest and its surroundings

https://www.facebook.com/groups/capibohuslavice/
Cameras transmit images from the nest in real time. Storks are part of wild nature, for which human standards and laws do not apply. Therefore, you may witness unsettling or unpleasant events such as stork aggression, bird of prey attack or infant death. However, it is a natural course of life that one should not interfere with. Thanks to the camera system, however, the nest is also under the supervision of experts - ornithologists, who can consider and take any action in the nest if they find it necessary and appropriate.
Thanks to webcam operators:

Great Spotted Owl - Webcam from a nest in Germany

Great 🙂 Thanks for the info.

7:32:40 Goddess is no slacker, he's diligently trying to improve the nest. Only the wind spoils it.

1.4.2021 Listen! Patron of the stork's nest in Bohuslavice Mgr. Petr Kafka, an ornithologist from the Broumovsko Protected Landscape Area, appeared this morning on Radiožurnál in the show Host Lucie Výborné.

So happy for Bohoušek!
I will probably spy on you here this year.
Uherský Brod is coughing about it this year.
https://photos.app.goo.gl/JupG8MkYRAbaCVC58

Alfi, here they also have a great website for the nest, where Tomáš adds updates and videos. There is a lot of information. https://www.capibohuslavice.cz/

Facebook probably won't work for me, I don't take Orwellian social networks.
But I looked at those pages capibohuslavice.cz and I have conflicting feelings about it.
On the one hand, amazement at the professionalism and dismay over their zeal, and on the other hand, the embarrassment of my own poor printscreen willingness with the storks from UB
But take it with a grain of salt in order, I take it all with humor.
These enthusiasts are great. And after the disappointment with Uherský Brod, I will be happy to share the joys with stork families here with you.
Both on the chimney of the Kara factory and the brewery chimney.

Sure, I understand, I don't have to do FB twice either. Coincidentally, you added nice screens from the nest in Brod last year. I was hoping that they would do something else in UB with the camera until the arrival of the storks, unfortunately it didn't happen, it's a pity, it's a nice nest, and they completed it with the way the transmission can't be returned. I'm curious about the brewery chimney if storks will nest there this year.