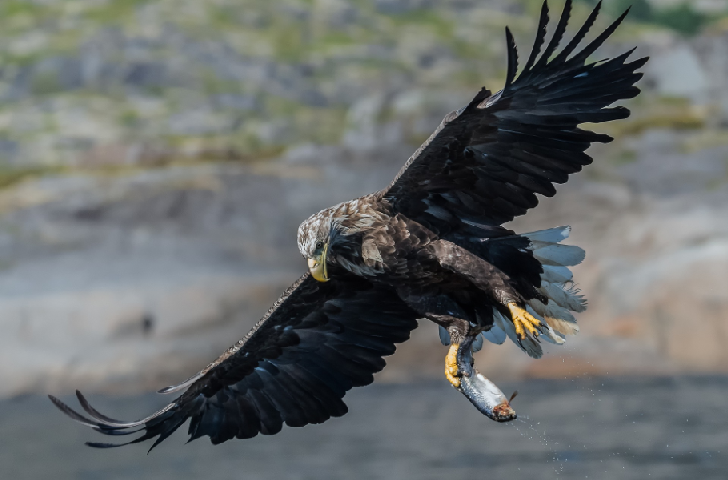 The Eagle is the largest European predator and the largest eagle living in the Czech Republic. Wingspan extends up to 2,4 m. The length of his body reaches 76-92 cm. The weight of the male is approximately 4 kg, for the female 7 kg. The young are colorless, the adult birds have yellow beaks and white tail feathers. It is similar to a Bald Eagle who lives in America and has a similar way of life. Winter does not mind him; he likes to bathe in the ice cloud. The sea eagle feeds on hunting and harvesting fish. He is able to catch waterfowl and occasionally feeds on carnivores.
It nests on the edges of the flooded areas, in the lake and pond areas.
Nesting begins in March. The nest has 1,6 m in diameter and 60 cm in height. Each year, however, the nest arrives a bit, so after several years it can reach a height of two meters and a weight of several hundred kilograms. The females tolerate 1 - 3 white eggs in the 1 - 5 interval, 74,7 × 57,9 mm and 141-145 g. The 38-40 gens are hatched on 5-6 days. The youngsters initially feed only the females who tease them all food, after 70-75 weeks they have already preached the prey and presented to them by a male. Feeding time on the nest is about 1-5 days. Even after leaving the nest, the puppies first stay nearby and their parents feed them for at least 6 moon. Sexually grown are in XNUMX - XNUMX years.
The sea eagle is widespread in Europe and Asia outside the tropical region (Palearctic Enlargement). In the north, the frontier of the forest is spreading, in the south the border extends from the Balkan Peninsula across Turkey to the south coast of the Caspian Sea. Some of the Mediterranean islands, Iceland, Kamchatka, and the islands along the northeastern coast of Asia are also known as marginal areas. The predominantly more northerly population in the winter traverses the southern regions and seeks freezing water. Sometimes fly farther south, such as the Gulf, North India, and so on. Young birds are doing sweepstakes, but they can also lead north (from the Balkans to Central Europe, etc.).
The eagle of the sea, which does not have a natural enemy in our nature, can only endanger the irresponsible behavior of the people. Eagles are sensitive to disturbance in the early stages of nesting, so the presence of people near the nest can lead to abandonment. Wood extraction can destroy the nesting site. However, the illegal introduction of poisoned baits, which has become widespread in recent years, is much more serious.

Eagle webcam from the nest in Hungary