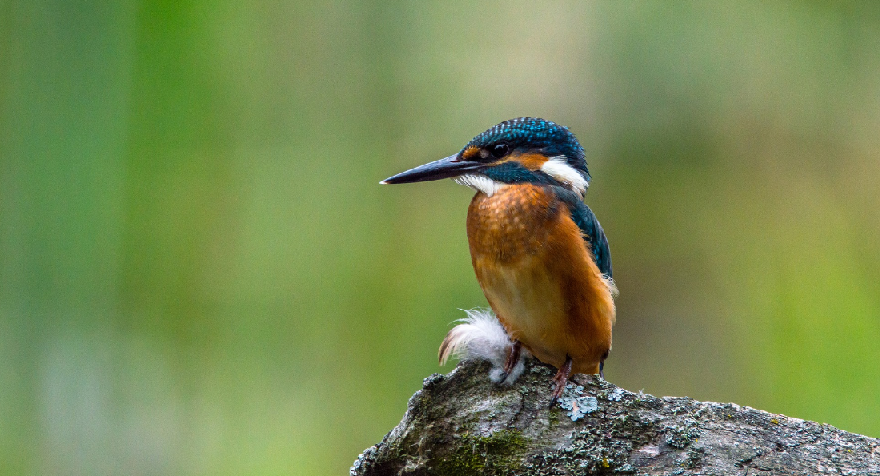 The Kingfisher is found not only in Europe, but also in South Asia, but also in the North of Africa. In the east he settled on the Solomon Islands in the Pacific Ocean.

Kingfisher is one of the distinctly colored birds. The head and wings are turquoise blue and the belly brown to rusty. From the long dark beak to the rear stretches a brown-and-white stripe. White feathers have a Kingfisher just below the beak. Weighs around 40g and measures 15-17cm, with 25cm wingspan.

The Kingfishers love the reclusive life they spend on calmly clear and clear-cut creeks, where they are also protected against the wind. The nest is dug by a beak in steep banks. These birds prefer places where the branches reach the water. They then sit down and watch their prey in the water as soon as they see one of them with their wings pressed close to the body almost perpendicular to the water. With their beaks tightly they catch the fish and wings come up to the surface where the prey will be killed. The fish swallow their heads first, so that the scalp does not scratch their throat. Saturation needs at least 10 small fish.

During the courtships taking place between May and September, both birds are hunting wildlife. These chases can last for several hours and end most of the time by bringing the male to his nest. If the nesting cavity is not yet ready, the two birds fly ashore as long as there is no dredge in which they then dig a tunnel that is slightly expanding at the end. Once the so-called engagement feed is completed, when the male wears the female food, it will add enough energy to the egg. The females usually bear 6-7 and are pure white. The 23-27 sessions are sown on the eggs, and both parents are alternating in the seating, as well as feeding.

In many places, numerical states are declining significantly. All this is caused mainly by pollution of the environment and the lack of nesting places, therefore it became a Kingfisher with a protected species.