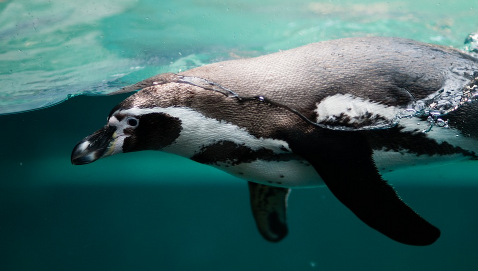 Magellanic penguin is a species of penguins that nest on the coasts of southern Chile, Patagonia, the Land of Fire, the islands of Juan Fernandéze, Falkland and mainly on the coast of Argentina and partly Uruguay and southern Brazil. The largest nesting colony is on the Punta Tombo Peninsula in Argentina.
It is tall 60 to 70 cm and weighs 3,5 to 5 kg. Males are generally larger than females, but the difference is seldom noticeable. It has two black cross horseshoe strips across the neck and breasts. He drinks sea water, then coughs up excess salt. The young and juveniles are gray-black on their backs and dirty white from below. Younger birds have white spots on their feet, the number of them decreases with age. Magellanic penguin lives up to 25 years. Like all penguin species, they get their food in the sea. Their diet consists mainly of small species of sea fish, cephalopods, molluscs, crustaceans and krill.
They spend more than half a year at sea, where they travel for food. They return at the end of September with cold currents of Humboldt (on the coast of Chile) and Falkland (on the coast of Argentina and beyond). These ocean currents are usually rich in fish, and the penguins feed on the way before nesting.

After arriving in the usual nesting place, the first arrives males, earn the most suitable place to dig a new burrow, or just clean the old. The average burrow has an 50 cm wide entry hole, followed by an 1 meter long 20 cm high corridor ending in a nesting chamber of 45 cm diameter that is about 40 to 50 cm deep below the surface. The chamber is lined with grass and twigs ejected by the sea.

After mating, the female usually bears two eggs weighing about 130 grams (the chicken weighs half). In sitting on eggs, the male and female alternate for a period of 43 to 44 days, so the young hatch in the second half of November. The baby weighs after hatching 60 grams, has a dusty dress and begins to see after 10 days. In about 100 days they are feathered with baby coloring, only two to three years get the typical coloring of adults. At the time of clubbing, last year's and last year's juveniles returned to the colony.

Fresh chicks can now enter the sea and start to feed themselves, until then they were nurtured by their parents. Old birds now have a short rest period when they feed in the sea and go back to their nesting grounds, where they cook together with older chicks. After the exchange of feathers, they sail around the end of April for another sea journey until the next nesting. It was found by ringing that adult birds are mostly true to their nesting grounds. Also, young offspring make long trips, six months after entering the water was found 3300 km away.
The reduction in the number of Magellanic penguins is caused by climate change, where regular sea currents unexpectedly do not bring enough fish to live on the breeding grounds around the breeding grounds, and human activity, whether the penguins are intentionally or unintentionally hunted. However, the greatest disaster is environmental disasters due to water pollution that will affect marine life or even penguins themselves. In contact with oil, feathers lose their insulating properties and penguins die of hypothermia. Natural enemies include sea lions and petrels at their nesting grounds.

12.8 - 17:10 CET camera 1 big cleaning of penguins, cleaning should be followed by feeding, penguins are already waiting 🙂

They are beautiful:) And what is their name?

And what is their name?

Currently, the 1 camera is not live here, it releases the recording. It's a Magellanic penguin.

Well:) Oh, I didn't know that I look at the camera for the first time :)

I did not want to read the description until now what you wrote it.