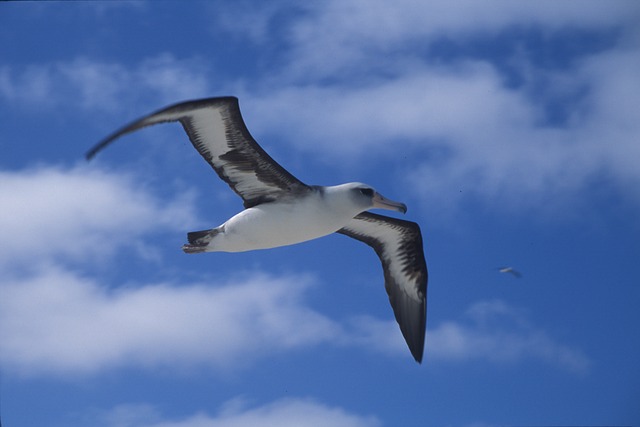 Albatros laysan is a large sea bird that moves across the northern Pacific. He is the second most common bird in the Hawaiian archipelago, its number is estimated to be 2,5 for millions of individuals, and its occurrence is expanding to new islands (probably new areas are returning).

Live camera from nesting of sea birds on Hawaii.

Laysan albatross is a large seabird that ranges across the North Pacific. It is the second most common seabird in the Hawaiian Islands, with an estimated population of 2.5 million birds, and is currently expanding (or possibly re-expanding) its range to new islands. Albatross is a persistent flyer, lives by water and his wings can be even 3 meters long.

The Albayros of Laysan is a large seabird that travels north of the Pacific. The second seabird is more common in the islands of Hawaii, with an estimated population of 2,5 million birds, and is still operating in expansion (or more re-expansion) in new areas. The wipers are persistent, white by water and six feet longer than 3 meters long.
He is also an albatross ancien of 51 ans.

Kauai - The Laysan Albums Camera will be offline for 2019
After 5 years of determination and hard work, the Kauai Albatross Network (KAN) and landowner decided to take the upcoming year from 24 / 7 streaming on the north coast of Kauai off.

9,49 Albatross on the bloom of the meadow

8,44 injured albatross stayed in the same place where he left the attacking albatross yesterday, hope he will not come back and continue. He probably has no power to leave

Ivu, the yesterday's albatross, was a long way to go back to the meadow and left yesterday, this one is on a meadow near the palm, like the nest. This will be one of ours.

7: 30: 06 cleanses the ball, the adult albatross arrives and starts to swing and returns. I do not really know if it's educational, but it's got a poor man where he did not have. It's not quite a spectacle at all

On Twitter she writes that she is a cub from another nest, apparently, the albatross has gone mad.

Thanks to Pétoo, I hope he's not injured, and he's probably shaken in the shots. Perhaps he recovers

9,07 for nests among the trees on the ground beautiful bird, red head, white belly, dark back and wings

I found a beautiful view from last year https://www.youtube.com/watch?v=QJ5k1lioKwM&feature=player_embedded

Wonderful Péťo, still for a while, and the albatross would start shouting as well

8: 33 beagle rooster at 1 nest, albatross watches him, cock cocks a couple of times, talk around the nest and walk away

11: The 37 albatrosses are already spying on the meadow

The 9,58 hen walks around the albatross and apparently picks up insects from his nest

8: 15 came to the hen, the albatross did not resist and went to see what it was there 8: 57 comes the beauty of the cock

the one on the nest 1 is already big, especially when the zoom camera is on it

5.3. again looking at the shakers close up

beautiful view of the cleaner in 10,25