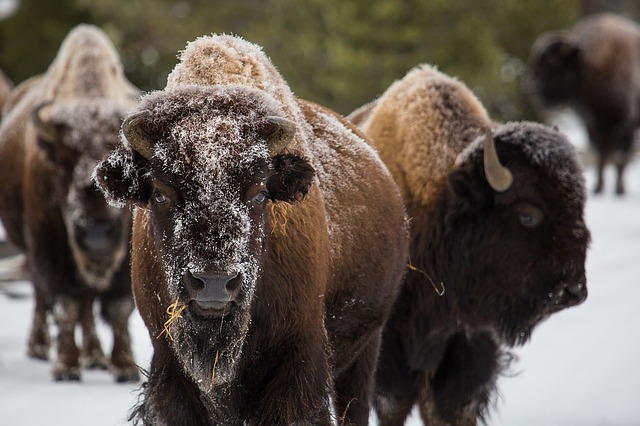 Bizon is the largest terrestrial mammal in North America. The predecessors of today's bison have come to Asia from America through the mainland landing on the site of the current Bering Strait. The camera in the Grasslands National Park is the largest intact example of what remains prosperous. The herds of almost 200 bison are loosely roaming around their native breed.

Prairie bison were grouped into giant herds, which could be made up of several tens of thousands of individuals (one of which even speaks of a herd that consisted of twelve million animals) covering the territory of 80 square kilometers. In the autumn, the buffalo herds moved south and east, and in the spring they returned back to the north and west. In the winter, the bison dispersed into smaller groups, snow-covered by the head, and grazed the grass.
The Grasslands National Park protects the mixed grass ecosystem more than 70 of different grass species and more than 50 of different types of flowers. Pastures are the only place in Canada where you can see the prairie, black-tailed and eastern-cotton puppies in their natural environment.

Walruses - webcam from the beach

Virgin Virgin webcam from the nest