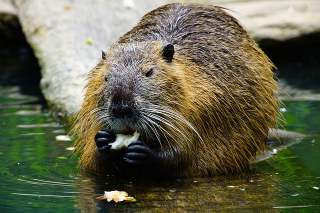 Live transmission of Beaver Nory using an infrared camera. Beavers are representatives of the beaver family. They are aquatic rodents, living near the water, where the trees and branches and dirt build up dams and beaver castles in which they have their nest. The beaver normally weighs up to 25 kg. They are looking for smaller rivers, small ponds or pools where they build their beaver castles. These can have up to 10 m in diameter and can extend up to 2 m above the level. They have at least 2 entrances that are hidden underwater. In the middle of the castle there is a single chamber that serves the beaver as a nest and resting place. Other castles do not build, but when found a deep enough pool, they build dams to block watercourses. Beavers cut down the trees with the lower incisors; the upper one serves as a lever. They are able to defeat a tree with a diameter of 1 m, although they usually cut the trees much smaller. It was observed that the two beavers together coaxed an oscillating average of a quarter meter behind the 4 clock.

In their jellyfish there is a bark and a bush of deciduous stomachs and shrubs and jejidh branches and roots. Bees are monogamous animals. They are in January or February, and the offspring are born from April to June. Infants are breastfed on average with 3 moons, although at the age of several weeks their parents bring delicate twigs to taste. Sexually mature at age 1,5 - 2 years, at that age parents are driven out of the nest.

10.12. shots straight into the bedroom, great thanks for it!

11 Time 58: XNUMX cobblers are sleeping well in the night.

Time on camera 08:49 we choose each other fleas 🙂 11:25 beavers sleep happily - the transmission can be moved on the bar!

Bobři nora živě !! Unfortunately, it is not possible to scroll through the bar. Time on camera 07: 14 beaver in the night.