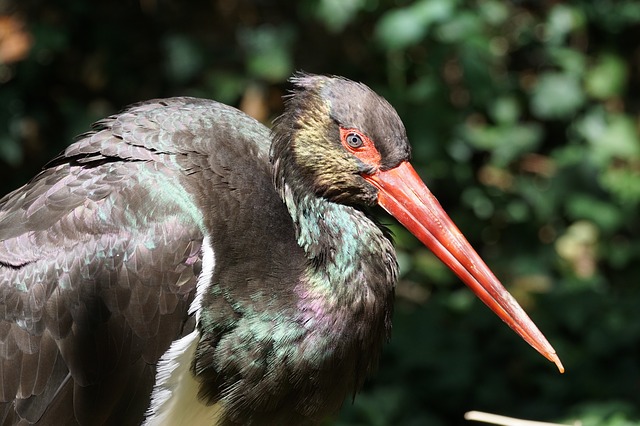 2 camera
The nest of black storks is located in the Estonian region of Jõgevamaa. This breeding area has been known since the late 90s, when black storks successfully nested here for many years. After 2004, the nesting site remained empty. The Tooni bird, which nested here at the time, has moved to neighboring territory. The nest to which Toon moved was the first nest of black storks with a camera in Estonia in 2005-2010. The black stork returned to the nest seen in the camera only a year or two ago. It's an old artificial nest. Ornithologists built a new platform in the early spring of 2021. Given the critical situation of the black stork in Estonia, it is a small miracle that the storks returned here.

The black stork is a large, mostly black bird with a bronze luster, a red long beak and a white belly. There is almost no difference between a male and a female, the young are dull brown with a gray-green beak.
The black stork lives individually and very secretly. The nest of sticks and branches is usually hidden in the woods in the crowns of old trees or on the rocks. The black stork feeds mainly on fish and other small animals. They hunt them mainly in smaller watercourses. It usually lays 3-5 eggs, from which young with white down hatches hatch after a month. He lives to be over 15 years old.

Thank you to webcam operators:
https://www.kotkas.ee/klubi/kaamerad

Beautiful… at least for next year.
Or is it not too late?

I'd say it's too late to nest. Before the female can bear the whole clutch, plus the time of incubation, before they learn to fly properly, it works out for me at the end of August / beginning of September. Young storks from Estonia begin to migrate in early August. But there are also late clutches, then it is a question of whether the young survive the first migration, which usually does not happen during late nesting.

Hello Peter, please, it is not known how old Charles II could be?

Hello Simon, unfortunately the exact age cannot be determined. But when he first started nesting in 2019 and took over the nest from a resident male, (Karl last date: March 29.03.2019, 4155/716 km / near Akkari in Syria), still with a female Kati, he was very inexperienced. Young storks return from Africa and in the third year of life, when they reach sexual maturity. So he can be at least six years old. Last year, Urmas Selis caught a black stork by a stream near a nest and installed a walkie-talkie and a 100C ring. It was not known 2% whether it was Karl XNUMX. This was not confirmed to us until this year, when he landed on the nest.

Thanks for the answer, I just didn't know if he got the radio and the ring last year, or if he had the ring before. .So it's nice that he's young and with Kaia they could give us joy for many years 😉

It would be very interesting if Kaia also had a radio and we could watch how far apart the couple winters in Africa ..

It's quite difficult to catch an adult stork, maybe Urmas will try this year. Since 2017, it has been regularly circling its young on the nest every year, a total of eight. Unfortunately, none of the storks survived.

Is it snowing in Estonia ??

She hates Kaia's eggs somewhere in the baby box so she can enjoy the young….? 😔

13.4. In the second nest, the male is still alone and is adjusting the nest, I hope that some female will arrive, there are few females in Estonia.

Hello, it is sad that he is alone, he is beautiful, wealthy (věskinely groomed nest)…
I would like to know where the storks get acquainted, whether during the hunt and the female then follows the male, or when he accidentally flies over the nest and sees the stork himself, he will try. ….
Discos and dating sites probably don't have 😊

Hello Simon, this is more of an issue for an ornithologist watching storks in the field. But I would personally guess that a female who is solo and is looking for a partner, so she chooses according to the location of the nest and whether there is a good source of food in the area. Unfortunately, there are more males than females in Estonia. It is possible that the male will remain alone on the nest this year, the same is true for the nest of black storks in Latvia

13.4.2021/XNUMX/XNUMX I added info about nests to the description

Kaia is not in the mood for mating this year either, when Karl walks around her, she prefers to go to the kitchen (on a branch in the foreground) so that she doesn't have to l. Snad so maybe something will change.😄

Does Karl have a partner? Is that Kaya? Krasavice😊

one ringed, the other without

It's the splendor of being able to follow the blue path of a birdmap, which turns into a real stork back home, on a nest. Many thanks to everyone, thanks to you this little miracle is possible. 😊

Good evening, Mrs. Simon, it's just a pity that the stork Karula, who was returning for the first time this year, didn't make it. Many thanks to ornithologists in Estonia. This year they added another nest of black storks, so there will be something to watch.

11.4. 2021 Camera 2 - New nest of black storks in Estonia. There is no information to nest yet,
Kotkaklubi wrote: yes, it's a new camera on the Black Stork nest. The nest we restored a month ago. We also built the old nest in 2006. More information coming soon…

8.4.2021 White ring with black code 712W on the left leg, this is the stork Eedi :), apparently he was just here to rest before he arrived at his nest. http://birdmap.5dvision.ee/index.php?lang=en

Karla will not return home. Sad

Good evening Simon, unfortunately many young storks will not survive. Karula was returning for the first time and apparently he had a fatal winter in Turkey. We are waiting for the results of the autopsy…. I wish you a wonderful Easter.

KARL II - TURKEY, province of Adana, district of Ceyhan, south of Ekinyazi - north of the village of Adapınar

5.2. The storks are still enjoying the heat in Africa, but spring migration is slowly approaching. This year, the black stork Karula should also return to Estonia. This year will reach adulthood.
http://birdmap.5dvision.ee/index.php?lang=en

31.8 Black stork Karl II, who was captured by Urmas and given him a walkie-talkie, dates from 28.8 is in Ukraine and awaits a flight over the Black Sea, Eedi stork returned from Ukraine to Belarus - dates to 26.8 and black stork Timmu dates to 30.8. is also in Belarus, it flies almost the same route as Eedi.

18.8 Does the migration map work for you, please? The black stork Mare is already on its way to the winter quarters, the signal was sent near Vladešt in Romania, it doesn't show me on the map yet. There isn't even a black stork added that Urmas caught near the nest and gave him a walkie-talkie (it looks like it could be Karl II). MAP LINK: http://birdmap.5dvision.ee/index.php?lang=en

Who would be interested, here is a link to the migration map of Polish black storks.