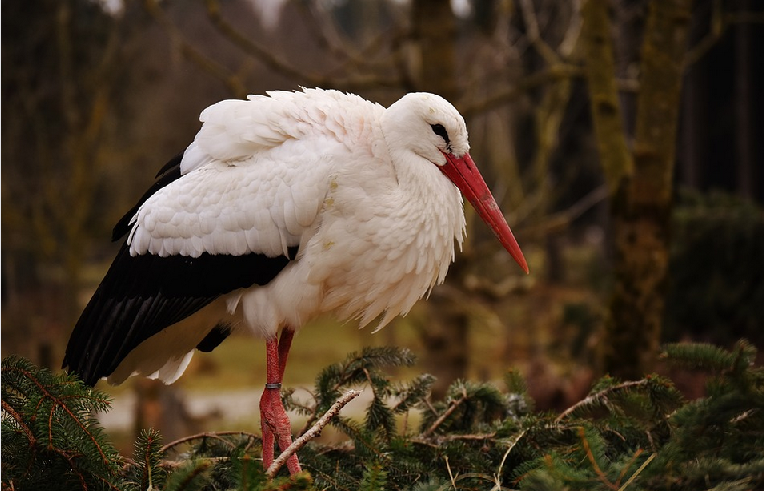 White stork is a large species of wading bird of the storks family.
Big, long neck and long legs. The body length is 95-110 cm and 180-218 cm wingspan, the male is slightly larger than the female. The weight is in the range of 2,3-4,4 kg. White color is predominant in color, squadrons are black, beak and legs red. Both sexes are colored the same way, the young bird has a darker red beak with a dark tip. In flight, unlike turtles and pelicans, the neck is stretched out.
Typical sound is the clapping beak, which is heard mainly on the nest.
The breeding grounds include Europe, Middle and Middle Asia and Northwest Africa. From 70. flight 20. centuries nest a small population also in South Africa.
They nest individually or in open colonies in an open farmland with access to swampy river banks, wetlands and flooded areas. At the end of March or at the beginning of April, the male is usually the first to arrive in the nesting place, which occupies the nest of the last year and defends it against the other males. After the arrival of the females, the two birds are loudly clapping his beak.
Nest builds both birds on rooftops, chimneys, pillars, trees, special pads and other elevated places. The building materials are dry branches, the basin is littered with debris, grass, animal hair and less often with textiles and other garbage, including pieces of plastic or string. The new nest has a diameter of 80 cm and a height of 15-30 cm. Every year, however, it is a little bit big, so it can reach a considerable amount of time (over 3 and up to 2 m in height). It nests 1x annually from April to August. The cluster counts 2-7 white eggs with dimensions 73 x 53 mm. The incubation begins from the first egg session and takes approximately 33 days, sitting both parents. The young are hatching gradually, and there is an age difference between them. To suppress younger siblings by older siblings does not occur in the nest, but weaker youngsters can sometimes be killed by their parents. This happens in the case of lack of food, when the adult birds kill the weakest pups trying to secure a better chance of survival of the remaining offspring. Although this method is quick and effective, it is rarely practiced. Young people start to cling to 14 and 25. the day is usually on the nest. Nursing takes about 8 weeks, and after the next 10 days the cubs are already completely separate. After nesting, the families merge into smaller and larger flocks, where they later drag into the winery.
The loss of nests occurs most often due to long-term adverse weather conditions, when young pups may become cold or perish by hunger. The adulthood reaches 3 in the ages, but for the first time it often nests on 1-2 years later. In the wild, the average 8-10 is on average, the record is 34 years and 10 months.

23.4 The young hatch in the stork park

Here are the storks also rings