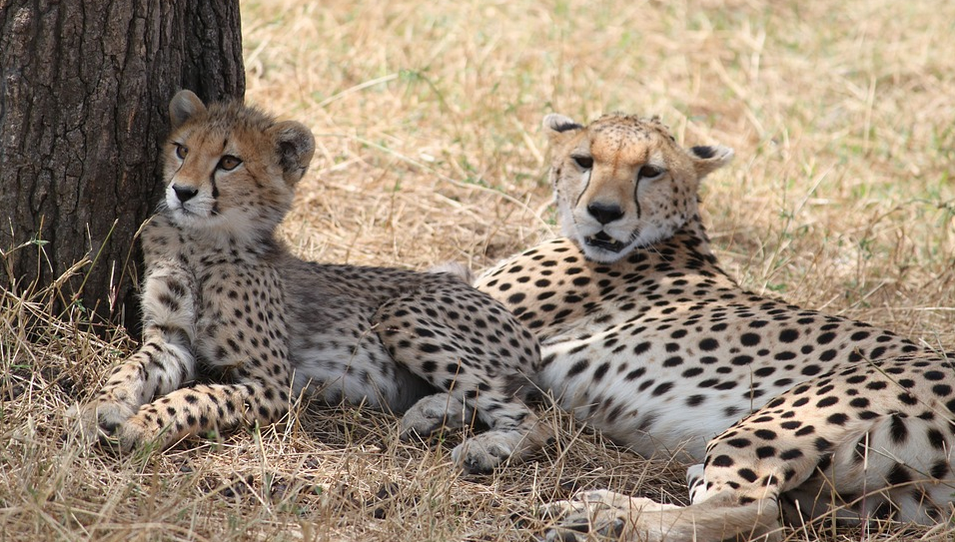 Cheetahs differ in many ways from the typical body shape of the cat, some of which are more like doglike beasts. It has a relatively small, round head and long legs and tail. The construction resembles greyhounds. The known fact is that, unlike most feline carnivores, it does not have completely retractable claws. Males are bigger than females.

The coat is golden-brown, faces and white bellies. The cheetah drawing consists of black spots, which differs from the leopard, whose drawing is made of black rosettes. A typical cheetah sign is black stripes stretching from the corner of the eye to the mouth - so sometimes the zoology is called "a cat that weeps".

Kittens are unobtrusively colored, but they have a long, light mane which is lost during adolescence.
Cheetahs are created for fast running. They have an exceptionally flexible backbone that serves as a spring when running. Cheetah does not touch the ground at all, running up to 7 with long jumps. The claws serve as trench nails, along with coarse hairs on his feet allowing him the best reflections. Running tail serves as a rudder and allows maneuvering at high speed. The cheetah is predominantly small ungulates such as the gazelle Thomson, gazelle Grant or impala. Occasionally they catch even smaller mammals. After killing the prey, he rests for a long time, only then trying to consume as much meat as possible. The prey often comes, lions or hyenas are easily removed. That's why the cheetah never returns to their prey, sometimes they also eat carrots.

Cheetahs can be mated all year round, but the courtship takes place mainly during the rainy season. The female is pregnant 90-98 days, then nests in the nest of grass 3 to 6 kittens. Mortality is very high, mainly because lions, hyenas or baboons are killing them if they find them. Mother therefore often transmits kittens from place to place. Yet, only 5% of pups survive within one year of age. The mother is weaned in 4 months of age, youngsters and mothers stay up to one and a half years old and learn to hunt.

Sexually mature at age three, in the old age they live up to 12 years, captive to 20 years.

Great documentary :-) Often I am looking for good documents and I never manage to find a nice one. They are always the best from BBC :-)