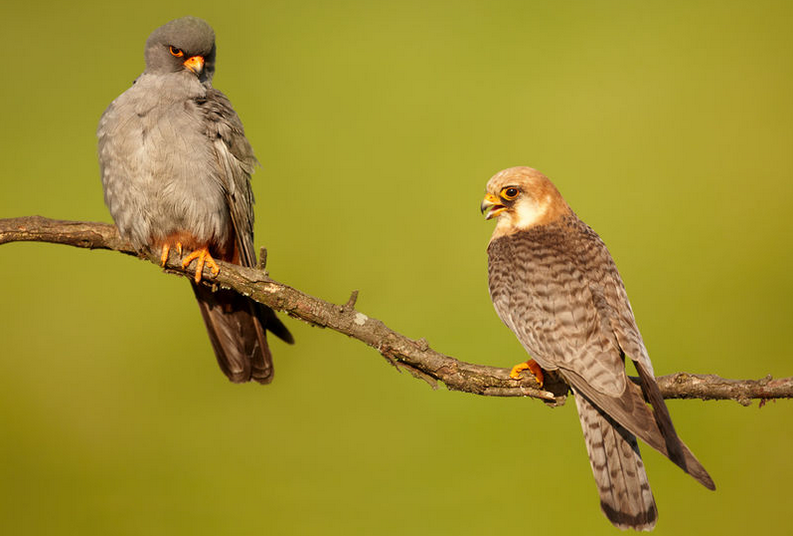 The nest box is located in the Hortobágy National Park in Hungary.
The camera system was provided by Net-Portal Kft. And the online broadcast is provided by Film Jungle Studio.
Thanks to webcam operators:

The red-footed kestrel is a small species of bird of prey in the falconry family.
Kestrel sizes (body length 28-34 cm, wingspan 65-76 cm). The male is all blue-gray, with red panties and tails and silvery-gray squadrons. The female has a rusty base without stripes, a gray back with dark stripes and a yellowish white head. Young birds resemble perches. The contiguous range extends from western Ukraine, Belarus and Russia east to the 120th meridian in Siberia. It also nests in some other European countries. A migratory species, wintering in South Africa. It nests in an open landscape with woods, in the steppes and in the valleys around rivers.
The clutch counts 3-4 yellowish or rusty, densely dark speckled eggs measuring 36,8 x 29,2 mm, whose incubation lasts 22-23 days. Both birds are sitting. The young are initially fed only by the female, who cuts the food brought by the male on the nest, later by both parents. They reach the age of 26-28 days and reach sexual maturity after the 1st year of age. It hunts mainly insects, less so even small mammals. It seizes prey on the ground and in the air.

Hello Saturday Petro,
do you think that the eggs will give something else here, or they will probably be unfertilized, because, then it would turn out both in Slovakia, that it would be a kestrel a head smaller than the first ones

Hello Dasha, the eggs could still hatch. At 11:12, when the female is feeding, it seems to me that there is a hole in one egg.

Hello Petro,
the blue kestrel is mom or dad, the other one is rather brown, you will definitely know it, thanks for the info, be healthy

Hello Dasha, the blue-gray is male. I also wish good health, Have you noticed that there is a new transfer of kestrel in the pot? If not here is the link: https://www.zoocam.info/postolka-obecna-webkamera-z-hnizda-slovensko/
Here's something about red-footed kestrel: https://cs.wikipedia.org/wiki/Po%C5%A1tolka_rudonoh%C3%A1
Nice day.

Mom or Dad flew away so there are two clumps

Today, June 18.6, I saw a small kestrel, yesterday someone was still sitting there, so I don't know when it turned out