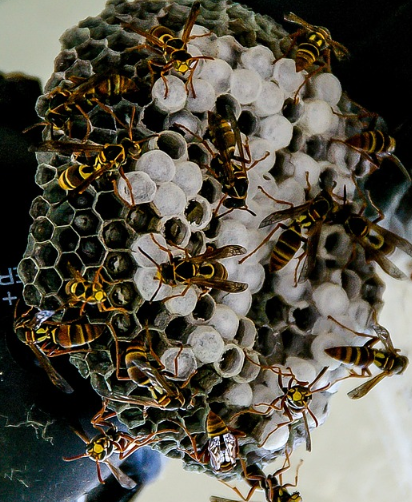 Common wasp is a representative of the poisonous honey-beetle insect from the Parsippus family. Unlike bees, it can use its sting repeatedly because it is not provided with back hooks. Most people know the wasp for its abundant occurrence in the vicinity of overcoated beverages and overripe fruit.
The wasps reach the size of 1,2-1,5 cm. The characteristic color of the wasp is a black-and-yellow striped butt. The females and workers are distinguished by three spots on the front label with a dark longitudinal stripe and yellow sleep with a black spot in the middle.
Wasps usually build their nest in the country, for example, in forests, along the banks of water and roads, sometimes also in dark cavities above the ground. It lives in the entire wasp of a colony of up to 2000 individuals. The wintering queen is awake at the beginning of spring, flying out and choosing the right place to establish a new wasp of the colony. It begins with the construction of the cells, which then lay eggs. These eggs will later hatch the first laborers; they are juvenile females, which therefore do not have sexually reproduced organs and can not reproduce. Immediately take care of the nest. From now on, the queen is dedicated to laying eggs only. By the end of the summer, males and females hatch eggs. The only fertilized females winter to make a new colony next spring. Other inhabitants of the nest, including the old queen, are dying.
Common wasp predominantly feeds on nectar, but also sweet on fruit or lemonade.
However, the larvae of the wasp are predatory. Workers go out every day to catch prey, most often flies and various small insects that kill kites (occasionally use a sting).
The poisonous poison consists of three basic components - Biogenic amines and amino acids, enzymes and polypeptides.

Life on the Antarctic Documentary Film

A documentary film about butterflies

Protecting the eagle of a bloody documentary in Slovakia