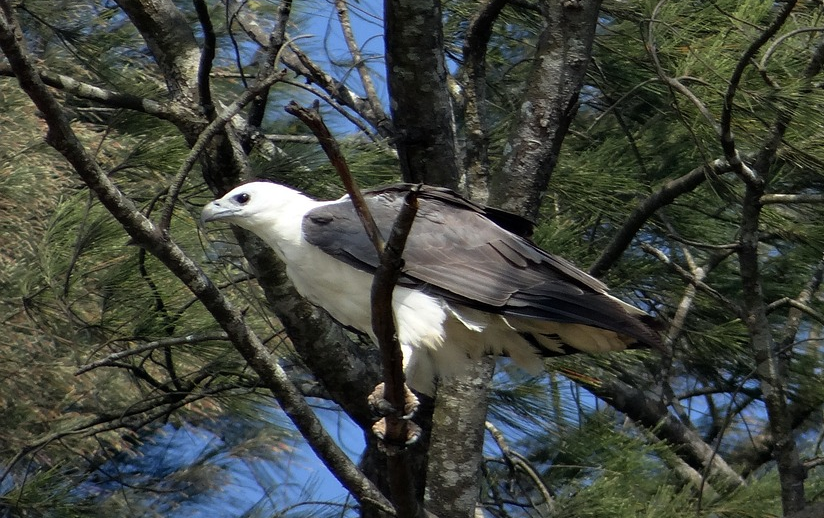 The white-eared eagle is a predator of the hawk-eyed family.
He lives in Southeast Asia in the region from India and Sri Lanka to Australia. His closest relative is the Sanford eagle living on the Solomon Islands, with which he is a superstition. From a global perspective, it is little touched, but within South Australia and Tasmania it is considered a vulnerable species and is considered to be endangered within Victoria.
Eaglecam was founded in 2009 and has been broadcasting live broadcasts from the Nest Discovery Center ever since
in the Newington Nature Reserve in Sydney Olympic Park, near the Parramatta River.
The EagleCAM program was founded and funded by a small group of volunteers who continue to develop and operate the technology that brings Sea-Eagles to the screen. High definition VCRs provide a very good detailed view of all the actions on the nest. BirdLife Australia gives people the opportunity to observe birds in their natural habitat.
In the Sydney Olympic Park Sea-Eagles, eagles have slight distinct differences. These are not easy to see and can change with light and angle of view. The female Lady has a distinctive mottled pattern on the right wing. Male Dad does not have these characters. The female is larger than the male.

Thank you to webcam operators:
http://www.sea-eaglecam.org

Good evening Petro,
Don't know what's going on with the transmission? Today I saw how the affected eagle stood on the healthy leg for a long time while feeding, the other one kept his balance.

Good evening Dáša, I have no idea, the broadcast is not even on the official website. It's about half past four in the morning now, so we have to wait until dawn.

6.10. 6,57 trying to stand on that sore leg, he lasted 3 minutes and still trained his wings. Now they're waiting for breakfast, somehow they're not flying.

4.10 06.35 in Australia, young eagles have fish for breakfast, so I don't know what it is, but they taste it and they like it

even before six, they trained their wings and the female and the hopscotch, so they starved

Good evening Petro,
I didn't see the fruit bat, I just registered that the young were scared of something, so the video made it clear to me, it was nice how the eagles might be able to defend themselves, they both spread their wings and even spoke, thanks for showing the visit to the fruit bat.

Good evening Daso,
water lilies sometimes appear there, last year there was a tree full of them one night. They slept on the branches almost until dawn. Have a nice evening 🙂

1.10. 5,28 the eagle tries, flutters its wings and tries to stand, I keep my fingers crossed for it and thank you for the message!

30.9 EagleCAM UPDATE Following the NPWS recommendation, we would like to reiterate that there will be no immediate intervention in the nest. We monitor their positive progress and, if necessary, review the situation for SE26 as we hope that the stronger eagle SE25 will fly away and leave the nest. Should any of the eagles now fall to the ground, we are allowed to intervene for immediate rescue and we have procedures in place to take this bird to an approved facility. Once again, we remind our supporters that the approval of the research of this project does not allow access to the nest itself or to the handling of birds or eggs. The nest of white-bellied eagles is located over 20 meters above the ground in a large eucalyptus tree,... read more

Good evening Petro,
in Australia it is 6.35 29.9, one of the parents brought food, a bird, and the younger one stands on one leg, with the other leg he just keeps his balance, but perhaps the leg recovers, what can he have with her, that he would have her broken in it joint, or whatever, he should get an orthosis, otherwise there is no difference between them, they are the same size, the younger one is no longer fooled by food, so it thrives well

Good evening Dasha, maybe it will be a birth defect.

Good evening Dasha, today it seems to me that his legs are swollen. At 05:38:54 he tried to stand up and he didn't do well. He needs to stand on his feet and be able to start strengthening the muscles, not only on his legs, but also on his wings, otherwise he will not perch and he would probably have a hard time flying. He might not even take off, as he bounces off his feet during takeoff. I haven't seen it anywhere yet. My parents would feed him even after the departure of SE25, but I don't know how long. Unfortunately, they do not interfere with the nesting here, they are licensed for research, they can only intervene when the eagle falls out of the nest. It's sad, perhaps... read more

Good morning. I was glad that it settled down among the siblings, this news surprised me, I didn't notice the problems. Even if the chick fell out of the nest and was carried away if it didn't stand on its feet and it couldn't be treated, what then? It is similar to the black stork in Makov. Also, even though they removed him, there was no help. At least the stork didn't bother. I once saw in the documentary such an affected, I think, heron in nature. 🙁

Hello Marcelo, if SE26 fell out of the nest, they would try to cure him, if they could not, they would at least save him the trouble, or he would be sentenced to live his whole life in captivity. You're right, in Makov it was similar to a black stork. On the nest of bald eagles Bery Colage (we don't have it on Zoocam - the transmission can't be transmitted), is a wild female for the third year, which broke her leg and has her whole dislocated, yet every year she and her males reared their young. But it happened to her as an adult, so she can live and hunt with it. SE26 is 8 weeks old and has no experience at... read more

Hello Petro,
the younger eagle doesn't have anything with its legs, the older one has stood up a long time ago, the younger one still can't do it somehow. I'm happy with them, the older ones are used to siblings, so it turned out well, be healthy

Hello Dasha, it looks like the SE26 doesn't have the strength in its legs yet and has a mobility problem. I also wish you good health. Here is the update. The EagleCAM SE26 update has mobility issues that have been apparent since hatching. He has already made significant improvements and adapted "a little" to his situation. The development of SE26 consistently lagged behind SE7 by 10-25 days in terms of mobility. This also applies to standing on your feet (as they move the first 5-6 weeks). Given that SE25 started last week, we have not yet seen what progress SE26 can make. They let the vets watch the videos, and no one can say anything with... read more

Friday, September 4 At about 9 pm we lost connectivity to the Discovery Center (Disco), from where we broadcast. Unfortunately, we are unable to determine whether this is a local energy issue or an ISP. We'll probably stay out of service until tomorrow morning.

4.9. Young eagles are wet, but day by day they have more colored feathers. They grow in beauty for us! They don't seem to be normally stroked anymore, only when feeding the younger one is not very sure. Yesterday I saw them rearrange the twig together. Camera time 13.16.39- female has nice claws. 13.42. younger bastion, it's a pleasure to look at him 🙂 I am also very happy that the young condor Iniko is fine! 🙂 🙂

Good evening with us
already 30.8 on camera after 7 o'clock, the little ones after waking up get a bird for breakfast and a nice change, I'm happy

27.8 camera time 16.06- feeding the younger eagle, growing and getting to the world, the older one has beautifully colored feathers- it's a nice spectacle.