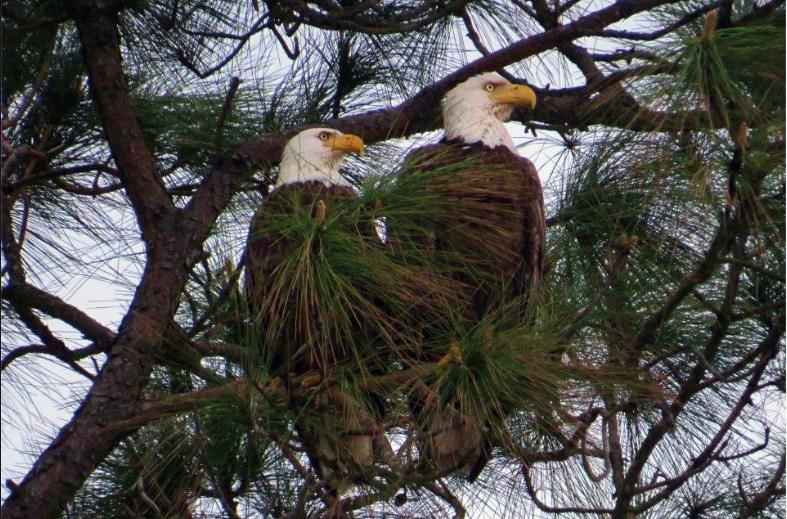 On October 1, 2013, the American Eagle Foundation (AEF) began streaming from a wild eagle's nest off the north coast of Florida. The nest is located about 24 meters above the ground on a pine tree and was built by Bald Eagles Romeo & Juliet about 12 years ago. Over the years, the nest has grown considerably in size and weight, probably weighing almost a ton. Since 2008, Gretchen Butler, a volunteer of the Audubon "EagleWatch" program and the American Eagle Foundation's "Eagle Nest Cam" program, has closely monitored and documented important events related to domestic eagles Romeo and Juliet and their descendants.
The pattern of life in Hamlet was predictable as the eagles of Romeo and Juliet returned in early autumn to start a new season, laying eggs and raising eagle chicks. At the same time, they protected their nest from all intruders and kept their eggs and chicks safe. They maintained an unprecedented 100% success rate over 10 seasons and raised 19 eagles.

However, the 2018-2019 season was very different, because several eagles disturbed the peace and well-being of this nest. The anticipation of the season ended in grief when Julie returned to the nest with an injury and was subsequently expelled from the nest by an opponent just a few days before the eggs hatched, so Romeo had to do the work for both of them. When the eggs hatched on Christmas Day 2018, an alien eagle flew to the nest behind Rome and took the hatched chicks. It was not an A2 female who was moving around at the time.

A2 was still seen when visiting a male, Samson, who also moved around the area and formed a pair together. For several months now, AEF viewers have been calling this beautiful eagle Gabby because it is so talkative, and in October 2019, the NEFL team officially gave it the elegant name Gabrielle.
Samson hatched in this nest of Romeo and Juliet on December 23, 2013. This was a happy nest; there was plenty of food, and there was very little sibling rivalry between Samson and Sister Delilah, who hatched on December 20. Samson and Delilah successfully left the nest, gained strength and improved their hunting skills. We know that Samson left the area on April 22, 2014, in 120 days.

It was four years later that Samson was seen back in the nest, with positive identification made by AEF staff from photographs and also from his flattened finger, which was observed when he was still young.
Season 2019-2020
Samson reappeared in the nest on August 26, 2019, and began bringing in branches and moss, indicating that he was claiming a nest and preparing for next season. His friend Gabrielle showed up on September 12. Since then, the pair have been seen together and slept in or near the nest tree. There must have been a change of guards in Hamlet. It was nice to see the offspring of Romeo and Juliet, Samson and his friend Gabrielle, develop into such a beautiful and compatible couple.

Thanks to the American Eagle Foundation for providing webcams from the nest:

Comparison of photographs by Gabrielle and Samson for identification 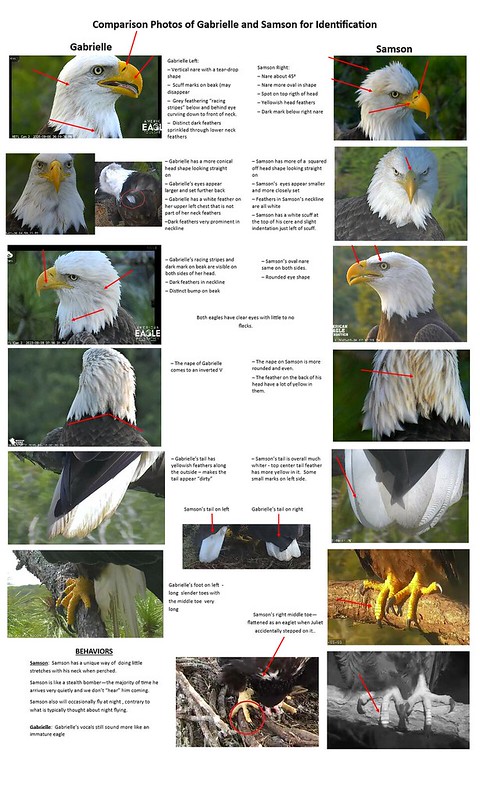 19.1. Transmission failure
Update:
All cameras are down, including our Axis cameras. Power is on site. It's a problem with the Internet via AT&T. This is a widespread problem with AT&T. Connor is working on it. Thank you for your patience.