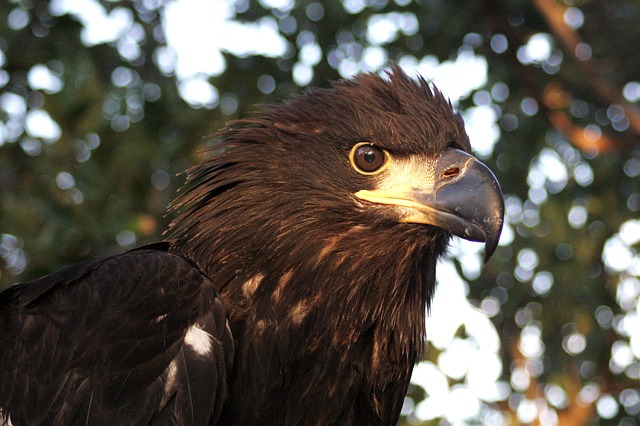 This nest is located on a private property in Northern Iowa, Decorah.
The nest is located in white oak in a piece of forest bordering the valley. A stream flows through a field where there is a pasture of cattle. In general, eagles begin courtship in October, productive mating in late January or early February, and laying eggs in the middle to late February. Hatching usually begins in late March to early April and the eagles fly out of the nest in mid-late June. While young people usually disperse between August and October, adults remain in the territory throughout the year.
The male is known as Mr. North. The female is Decorah North Female, or DNF, which replaced Mrs. North in the summer of 2018.
The first nest in the North was built in a pine tree. The branches collapsed after the second nesting season, and the eagles moved on to the dead elm. They only nested there for one year before moving to their current location at the end of the year. In August of 2013, their nest collapsed during an extremely severe storm and slid off the nest tree. None of the tree branches were broken or damaged, so the RRP decided to build a starter nest in the same spot. By the year 2018 there will be the seventh season and the fourth nest in this territory.
The camera broadcasts nonstop in 24 / 7 mode, even at night when the camera is switched to night mode.

Bald Eagle is the fourth largest eagle in the world. It is a bird of prey from the hawk family. It grows to a height of 85 cm, the wingspan is up to 2 meters. Due to its majesty, the bald eagle has become the American national bird, a symbol of the Republican spirit. The Bald Eagle uses one nest and 35 years. It is most common on the coast, in river basins and in lakes of North America and northeastern Siberia.

Around 20.00 CET it looks like DNF is laying… .Eggs, but did not show, now resting

That's right, there are already 2 eggs, so we'll see if there will be a third here.

great, she hurried even though the nest is in the snow

16.2. DNF often stays in the nest. Two years in a row, she laid the first egg on February 21, but according to her behavior, it will be earlier this year.