Great Spotted Owl - Webcam from a nest in Germany 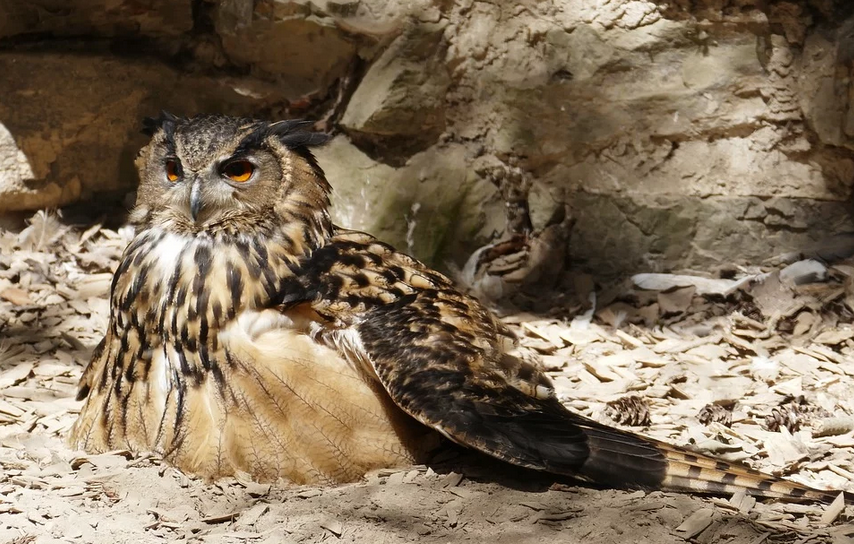 Families of large eagles live in the courtyard of the castle ruins of Königstein.
During the breeding season, the inner courtyard is closed to visitors, but birds can be seen from the bird tower.
The camera transmits 24/7 live streaming.

Eagle Owl
The great owl (Bubo bubo) is the largest European owl; this is also indicated by his English name, which can be translated as "eagle owl". It reaches a range of 180 centimeters and weighs two to three kilograms.
During the day he hides on rocks or old trees, in the evening he flies into the open countryside. Its nest is only a shallow hole on the ground or on a rock cliff, but sometimes occupies the old nests of predators. It does not avoid the proximity of human settlements, sometimes nesting in the quarries used. They feed on birds and mammals up to the size of a smaller hare, hunting in a silent flight low above the terrain. When hunting is oriented mainly hearing.
During the flow in February and the beginning of March, the male calls his not too loud "angle", which he repeats up to a hundred times. Young birds cannot yet shed this characteristic call. When they leave the nest, they emit a hiss - a sure sign that the area is occupied. The owl nests in March and April, sitting on eggs for about 35 days. The young climb the rock wall at the age of 20 days, long before they can fly. Endangered, especially protected.

Thank you to webcam operators:
https://www.koenigstein.de/ksn/K%C3%B6nigstein/Aktuell/Uhu/

Eagle webcam from the nest in Hungary

Hello Leono, Leopold was sitting on the wall, behind the bushes of Charlotte.

20.3. again beautiful shots of the fortress, but without BUB

14.3. the drum camera did not find, but shows strength

10.3 writes that courtship takes place and nesting begins later due to the cold

6.3. At 4,20-4,30 owl on the nest - I do not know which, I have to learn to recognize them again after that break :-). She stayed 10 minutes, another sounded nearby. They could be heard even after this one flew out of the nest.

3.3. no one has been seen here for several days, I hope they have not found another nesting place

Thanks to Jara for the warning, somehow a number one slipped in there, I adjusted the time 🙂

great, I'm looking forward to it