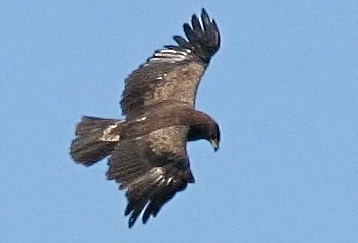 Nest 1
The nest of Lesser Spotted Eagles is located in a forest owned by the Latvian State Forests, in the Kuja Natural Park near Aizkuja. The eagles built their nest in 2018 and successfully reproduced here in 2019.
Eagle blooming is a medium sized predator of the hawk family. It is widespread mainly in Europe and Asia, it also winter in Africa. They live with rodents, reptiles, amphibians and birds. IUCN leads the species as little affected.

Nest 2
The nest is located on the western edge of Zemgale. It was found in 2018.
The nest is built in spruce at a height of 17 meters. As for the locality, it can be assessed as typical for the nest of the bald eagle - about half of all nests of bald eagles in Latvia are located in spruce and a large part of them is built in places where branches formed several new peaks when breaking the trunk. Depending on the size of the nest and the condition of the material, the nest is at least five years old.
In 2019, the nest delighted the audience with a harmonious nest - a pair of eagles. Anna and Andris raised one young, which grew calm in conditions of abundance of food and successfully left the nest.
Jānis Ķuze and Jānis Rudzītis placed the camera system in the nest. Thank you for your support Jānis Kažotnieks and Renāte Kviese!
The Little Eagle live camera provides the Latvian Fund for Nature under the project "Ensuring the protection of the Golden Eagle in Latvia" (LIFE AQPOM), which is funded by the European Commission LIFE + program and co-financed by the Latvian Environmental Fund.

Nest 3
The nest of the bald eagle in Zemgale has been known since July 2017, when a young bird was found here. It is built on a birch at a height of about 20 meters. Depending on the nest material, the nest is at least five years old.
The online camera system was placed at this location in the spring of 2018. Later, during the nesting season, a few eagles remained in the nest, but nesting did not begin. In 2019, nesting began, the female laid one egg, but did not hatch.
Jānis Ķuze and Jānis Rudzītis placed the camera system in the nest, and Valdis Lukjanovs and Ģirts Strazdiņš helped maintain it.

Thank you to webcam operators: https://www.lvm.lv/sabiedribai/web-kameras

28.7 Yesterday a young eagle flew out of the nest

Hello Zuzko, unfortunately another nest where the forest hawk was in charge. Yesterday he took the chick out of the nest 🙁