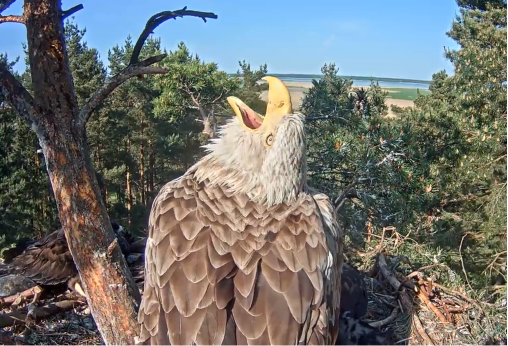 The sea eagles' nest is located in Matsalu National Park.
The camera is installed in the oldest known nesting area of ​​the sea eagle in Estonia. The first records of the WTE nesting in Matsal date back to 1870. And even then it was noted that "the nest has been inhabited for many years". The nest visible on the webcam was built by sea eagles in 1996, after their previous nest was on a tree that withered - the previous nest was found in 1990. The current nest was permanently and annually inhabited and the eagles bred a total of 29 eagles among 1996 and 2020, it is a very productive nesting ground. This area is very suitable for the sea eagle - Matsalu Bay and the surrounding pastures - and as proof of this, another pair of eagles began to nest very close to the pair visible in the nesting camera. The distance between two pairs is less than a kilometer. Eagles nesting this year Eve and Eerik have no rings.

The camera was installed on the nest at the beginning of February by Urmas Sellis (Eagle Club Estonia), Omar Neiland (Beta Grupp OÜ) and assistants from the Estonian Environment Council. They use an AXIS F41 camera with a custom-made microphone from Omar. The main part of the camera is under the nest on the tree trunk, but the lens and sensor are at the level of the nest.

The camera is powered by solar panels, and to save power, the camera turns off when it gets dark and the batteries are low. Live broadcast from the nest is resumed at sunrise. The camera image is transmitted via the 4G mobile internet, so that in the event of intensive use of the network, the transmission may be interrupted. The camera is streamed through the Eagle Club Estonia channel.

sea ​​Eagle is a species of hawk-predator belonging to the largest living eagles at all.
It lives near water and feeds mainly on fish and birds. It is predominantly found throughout Europe and Asia. Unlike other types of eagles, it is the lowland inhabitant.
sea ​​Eagle is one of the most beautiful animals of our bird world, which can not be confused with other predators. The wingspan is almost 2,5 m. The female is significantly larger than the male.

sea ​​Eagle is ranked among critically endangered species of our fauna. Still, they are persecuted, threatened by the use of poisoned baits in the form of dead animals impregnated with poison or illegal blasts.

Webcam from the forest- Estonia

Trout - webcam from the river

A nest lined with food like a hamburger. 🙂 Erik is a great hunter and the chickens are literally growing in front of their eyes .. Here it works as number one and hopefully it will last them as long as possible.

3.5 Nice freezing. calm morning .. At - 06:08:02 the male Eerik brings food (probably the remains of some fish). After a while, the female Eve starts feeding the chickens. The freshly hatched crumb is quite a bastion and can already be seen in the older chicken (?), Ie the larger one, certain signs of dominance and small manifestations of aggression…

1.5. The eagles are beautiful! Mainly to be lucky here and the season was as it should be. The parents are beautiful birds, there is a nice environment and the camera is perfectly placed, everything is in the palm of your hand.
At 21,35 there is a feeding 🙂.

Hello everyone, 11.39 in the background two reindeer ??? Otherwise, it incubates diligently here and we should expect chickens soon.

Hello, Libuše, no, they are moose. Reindeer occur in subpolar to polar parts of the northern hemisphere. Matsal Bay on the Baltic Sea is home to moose.
Here I wrote an article about NP Matsal. https://www.zoocam.info/zapis/narodni-park-matsalu-estonsko/

Hello, Petro, thank you very much for the clarification :).

You do not even start

23.4. Have a nice morning to everyone here. 🙂 ..The view of the local massive, solid nest, probably located (in my opinion) on a branched aspen poplar, must please every lover of these predators and fill them with optimism of great stability. Unlike Durbe, it has a versatile support of strong massive branches and just something does not move it. , offering a truly general, childish view of the nest and surroundings, offering hope for an interesting observation of the way of life, the sea eagle. 🙂