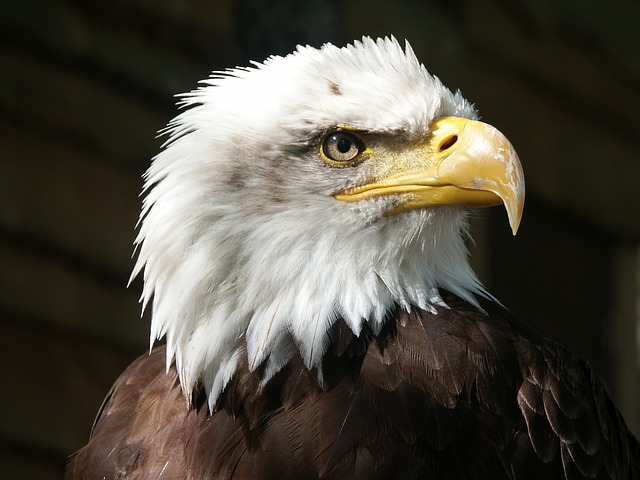 Webcam Nest of the Bald Eagle. The Webcam has been in operation since 2012 and since then broadcasts 24 / 7 mode nonstop. Orli has been living the nest since 2006 and we have been able to watch birth, growth and injuries and the death of new additions. Extensive information in English can be found on the operator's website http://www.dickpritchettrealestate.com/

Bald Eagle is the fourth largest eagle in the world. It is a bird of prey from the hawk family. It grows to a height of 85 cm, the wingspan is up to 2 meters. Due to its majesty, the bald eagle has become the American national bird, a symbol of the Republican spirit. The Bald Eagle uses one nest and 35 years. It is most common on the coast, in river basins and in lakes of North America and northeastern Siberia.

Thank you to webcam operators: http://www.dickpritchettrealestate.com/

https://www.flickr.com/photos/137965877@N06/23790949859/in/dateposted-public/
GinnyLWI (administrator): Our camera operators often zoom in on eagle feathers and you can see old and new feathers on Harriet and M15
When the feathers go through normal feathering, the same number of primary feathers on both sides of the body are lost. Gradual replacement of the primary feathers creates only small temporary gaps.
Eagles have approximately 7-7 feathers and it may take 200 or 2 years to complete the washing sequence. Adults usually begin to melt during the breeding season, which ends sometime in the fall. They spring symmetrically and lose the same number of feathers on each side of the body for about the same amount of time to maintain their ability to fly.

28.12 - 00:48:35 Camera 3 attack a virgin eagle owl on the M15. The eagle flies to the right and knocks M off the branch, M hits the lower branch, quickly recovers from the attack and flies to the branch near Harriet to protect her. They both vocalize. Fortunately, M is fine.

hello, what happened to the eagles? not available the next day, please reply.

Hello danuli, the camera works without problems, the cubs do not have it yet, only the eggs. At Harriet and M15, the eggs will not hatch until around January 20. You probably mean the second camera from Florida, Captiva on the island of Sinabel, they had an outage there, but since yesterday the broadcast has been going online. I added a second camera there yesterday, which they launched. Here is the link: https://www.zoocam.info/orel-belohlavy-captiva-florida/

Hi, I couldn't, then a camera and a blue link appeared, and it's ok. I meant the first birds. They're 12 days old.

Hi danuli, if you haven't seen an online clutch, here are the videos
https://www.zoocam.info/zapis/v-ostre-sledovanem-hnizde-orlu-belohlavych-harriet-polozila-2-vajicka/

19.12 Harrietka usually lays the second egg every two days, which falls on today, don't forget to tune the transmission!

Parade 🙂 Now they will start to fully incubate and we can look forward to eagles around January 20.

17.12 - 12:35:45 Harriet brings her favorite pine twig to the nest. Pine branches act against parasites. Fresh green twigs contain terpenes that are volatile and strongly aromatic. Eagles use them to protect against bacteria, fungi, insects and parasites. Harriet just knows how to keep the nest fresh, she's just a great mom!

Hello Petro, at 09.08.30. is a close-up view of an egg. I would like to ask if it is common for there to be unevenness on the camera, whether the egg is OK. The largest can be seen in 09.09. Thank you for your answer.

Hello Marcelo, the egg is fine, the inequalities are as common as we can see on hens' eggs. She deceives the camera a lot, you can see a lot of dirt on the egg. Anyway, there is nothing about the egg and we can look forward to the second on Saturday.

16.12 Harrietka has been on the nest for almost 2 hours now, all the characters are heading for the egg !!

Hi Ivo, me too, she's pretty restless, so maybe she just won't test us 😀 But I believe it will be today!

16.12 Perhaps we will finally have eggs here.
Here's a little about how Harrietka will behave and how the egg will form

How will Harrietka behave? The first sign of the impending egg-laying is that Harriet will move in the nest, lie down, and be nervous. Another sign is usually more intense breathing with rhythmic opening and closing of the beak. The feathers on the body will be fluffy, the wings will be slightly from the body, which will be hunched over. The tail is kept in a horizontal or raised position by up to 45 degrees. Then the tip of the tail begins to move synchronously with the depression on the back. These movements are probably caused by cramps when the egg travels down from the vagina, the movements are almost invisible at the beginning, ending with a sudden cant of the buttocks, which characterizes the moment of laying the egg. Since Harriet is very experienced, it can be a very quick process for her.

How does an egg form?

When ovulation occurs, an egg (egg yolk) enters the oviduct. The tubular tube is a twisted tube which,
is 63 to 68 cm long, when fully developed it is divided into five main sections.
These sections are the infundibulum (funnel-shaped funnel), the magnum (protein-forming part), the cervix, the uterus, and the vagina.
In the first part of the fallopian tube, the infundibulum (or funnel) is 8 to 10 cm long and serves to catch the yolk ball and introduce it into the fallopian tube. There is also fertilization of the egg, usually 5-10 minutes after ovulation.
The yolk stays in infundibulum for 15 to 17 minutes.
The next part of the fallopian tube is a magnum. It is 33 cm long, that is the largest part of the fallopian tube, as its name suggests (magnum is the Latin word for "big"). The yolk remains 3 hours during which egg white is formed. White is stored around the egg yolk in several layers. The first layer consists of chalky white, with internal sparse white, outer stiff white, and finally outer sparse white.
The third part of the fallopian tube is a strait that is 10 cm long. Isthmus, as its name implies, is slightly narrowed (the term isthm referring to a narrow strip of land connecting two larger areas of the earth).
Isthmus is the place where the inner and outer membranes of the membrane are formed. The developing egg stays here for 75 minutes.
The next part of the fallopian tube is a uterus measuring between 10 and 13 cm. In this part a shell is created.
The shell is largely made of calcium carbonate. The flesh body mobilizes 8 to 10 percent of body calcium from its bones to create the egg shell.
Bones provide 47 percent of the calcium needed to make the shell, and the fetus provides the rest. Pigment deposition, if any, occurs in the shell gland. Eggs stay here for 20 hours or more.
The last part of the fallopian tube is a vagina, about 10 to 13 cm long. Chew does not play a role in the formation of an egg, but it is important when laying eggs. The scar is the muscle that helps push the egg out of the body.
Close to the vagina are deep glands known as host sperm glands, where sperm are stored for a long time usually 10 days to 2 weeks. (one of the unique things in birds is that sperm remain viable at body temperature).

10.12 Harrietka and M have a beautifully prepared nest, high rails, a nicely lined nesting bowl, but Harrietka somehow doesn't want to put up with it. No wonder, after the last two clutches in one season. With the second clutch, their season was extended and the E15 stayed in the area for a long time. So hopefully we'll see the eggs soon (Harrietka lays two).
08:43 Harrietka exercises her dominance, kicks M and jumps on his back, thus showing that she wants to mate. Of course, M will understand and after a while mating will take place.

8.12. around two in the morning, Harrietka jumped on the nest, and shortly afterwards, the male jumped in to check the nesting bowl. After a while, M15 returned to a branch in the crown of the nesting tree and Harrietka remained on the nest. Looks like something is coming up…

Camera 1- 5.12. camera time 07.08.- Harrietka and M close up at the old nest. They are still adjusting it, we will see where the female lays her eggs.

Camera time 1. 06.41.19.- M proves to Harrietta that she wants to have cubs with her 🙂 Camera time 2. 06.43.- M flies at a stranger and drives him away. They were recently attacked by an eagle owl, Harrietka would need more peace now.

She is poor sleepy, it was a busy night for her.

23.11 - 17:06 A foreign four-year-old eagle on a branch, after a while he jumped into the nest and at 17:15:38 another foreigner arrived, a young eagle about two years old. M kicked him out of the nest at 17:19:11. All 4 - Harrietka, M and the aliens spend the night on the branches of a nesting tree. It will be interesting in the morning.

20.11. 13:13 Harrietka arrives at the nest with food, it's something hairy with a long bare tail…. Maybe an opossum

20.11. 1:46:55 Apparently he was attacked again by an eagle pair sleeping in a tree by the road, a barn owl. On camera 3, you can see, after the vocalization of the eagles, at 1:47:23 flying over one piece from the nest and the other sitting on the land on the right. Harrietka returns to the nest and M joins her.

Hi Iva, thanks for the alert! They cut a piece of forest across the nest across the highway, where the otters apparently nested and it is possible that they are looking for a replacement nest. That's probably why Harrietka wanted a replacement nest. Their new nest is more covered than the existing one. Here, during a hurricane three years ago, a lot of branches broke and the attacks of owls are escalating, apparently they no longer feel safe here.

Hi Petro, it also occurred to me that it is no longer safe for them here. It seemed to me that they were trying to knock Harrietta out of the branch, according to the sound and how shaken she was when she flew to the nest.

Today, however, they are often at the nest, they even repair it and kick the nesting bowl, M tried to lie in it. He can't wait to incubate, he likes it 🙂 It's a beautiful view of them, maybe Harrietka will change her mind and lay eggs in an old nest.