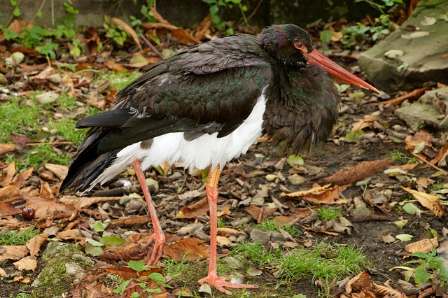 Stork black is from the stork family. Black stork is a large, predominantly black bird with bronze shining, a red long beak and a white belly. There is little difference between male and female. The youngsters are dull brown with a gray-green beak.

This shy, rarer inhabitant of mountain forests, hills and alluvial forests lives individually and very secretly. A nest of sticks and branches is hidden in forests in the crowns of old trees or rocks. It is spread in most of Central and Eastern Europe and in milder regions of Asia to the Far East. European and West Asian populations stretch for Central and West Africa in winter, others to India and China.

They live mostly with fish and other small animals that fish mainly in smaller watercourses. They usually tolerate 3-5 eggs from which the chicks with white feathers are hatched after a month. Stork is experiencing age over 15 years.

A bird of prey bird in Sweden

They will definitely not nest here this year. It's too late for eggs.

just today he slept on a branch until 4,26 then went down to the nest and flew away at 4,38

from 9:47 there are 3 black storks on the nest on the camera

17.4 Transmission failure - The router and batteries need to be replaced.

28.3 Black storks nest in Latvia online again !! The stork has already returned and slept in the nest.

17.6. Too bad they haven't been found before, so maybe they'll start a family next year… ..

The camera stopped working after the storm. Jānis Ķ. He is informed, can do nothing remotely, must go to the nest. A possible fault is a fallen tree on the wires.