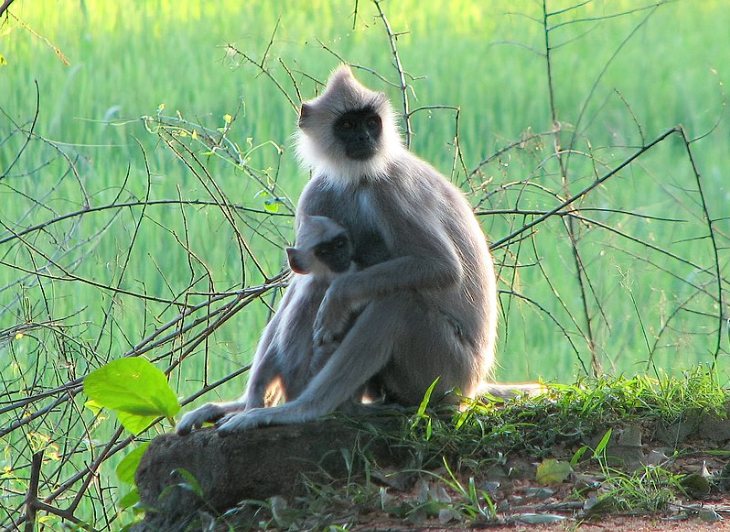 Hulmani are among the primates of the family Vervetidae. They are quite large monkeys with a slender body, a small rounded head and a long tail. It measures about one meter and helps them move through trees. Another adaptation for life on the trees is long fingers on the hands, except for a thumb that is stunted. Sacred hulmani are mostly gray with black face, ears and limbs. The young have a soft dark brown to black coat, which gradually softens them. Typical for this species is a tuft of fur above the eyes facing the front, which resembles an eyebrow. The body has 50-80 cm long and weighs between 11 and 18 kg.
Hulmani most often live in family groups consisting of one dominant male, one to seven adult females who are related, and their juveniles of different ages. There is a strict hierarchy based on the physical condition and age of the animal. The highest ranking positions are occupied by the strongest males and young females. Good relationships in the group maintain mutual care for hair and other social contacts. Each group inhabits and defends its territory, in which it lives. The leading male defends his band from the ranks who would like to seize his females.
Hulmani sometimes also creates only male groups that read 2 to 14 individuals, their territory may overlap with the family band territory. In addition, there are bands consisting of several males and females of different ages.
Their main food is the leaves, flowers and buds of trees and shrubs, as well as water plants, fruits or fruits of wild plants and fruits of crop plants grown by humans. They also occasionally eat small invertebrates and vertebrates, and also enjoy the eggs of birds.
Females are pregnant about 6 months, twins are often born. The born baby has a weight of 0,8 to 1,2 kg, and the female nurses about 10 to 12 months, and carries additional 6 to 8 months. At that time he does not come to heat. Often, other females are also taking care of the baby, who currently do not have offspring. Sexual maturity reaches male hulman in about 4 to 5 years, females in 3 to 4 years. On average, 20 live in the wild, captured by 25 for years.