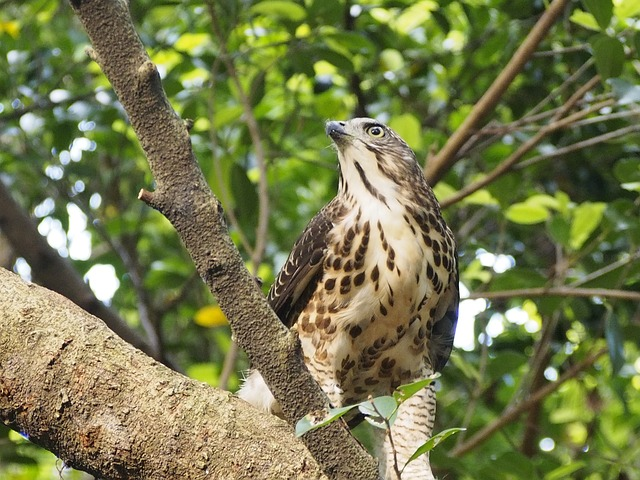 The nest of forest hawks in Riga has been known since 2016 - it is believed that the nesting pair has moved here about 600 meters from their original home. Near the nest are industrial buildings with often audible backgrounds and private houses. The nesting tree itself is located in a small wet area overgrown with weeds and shrubs. The nest is built in black alder, which grows on the edge of the ditch. The hawks built their nest on the remains of a crow's nest.
During this time, the nest was inspected and the chicks were ringed. This pair, and especially the female, is known for its special nature among visitors when ringing - it tends to behave very aggressively and attack people as they approach the nest. On the other hand, birds are used to people and equipment behind the yard in an industrial area. Interestingly, at the time the female laid the first eggs, a couple of crows built their nest about 50 meters from the nest. Crows are a common source of food for young hawks, but it is common for hawks not to touch other nesting birds near their nest and use this safe area.

The broadcast shows nature to viewers as it is. With beautiful moments and the harshness of nature.
Organizers do not interfere with natural processes except when birds are caused by human damage.

The camera system was installed by Ģirts Strazdiņš, Arnis Zacmanis and Jānis Rudzītis in this nest.
We thank SIA “Darb Spars” (https://www.darbaspars.lv) for the power supply and permission to place the necessary equipment to operate the system.

Thank you to webcam operators:
https://dabasdati.lv/lv/kameras2020

The Goshawk is a predator that, as the name suggests, lives in the forest. They belong to the Sparrowhawk family. It is very manoeuvrable and quickly attacks short range. It feeds mainly pigeons, hens, pheasants and does not despise a hare or reptile. The hawk is found in Europe, North America, North and Central Asia. In our country it occurs in most of the territory. The female is one third larger than the male and reaches the size of the buzzard. The hawk's nest is high on the trees. Searches for quiet places. In favorable conditions, a hawk pair uses one nest for several years in a row. In March to May, the female lays up to 4 eggs, which most of the time heats. Several times a day, the male brings food to the female and alternates it briefly in heating. After only three weeks, the young can tear the food itself.

A bird of prey bird in Sweden

21.6. The nest was abandoned all night .. in fact, it wasn't, the evening uneaten prey was lying here. At 04:53:20 one of the chicks emerged from somewhere in the branches and started to have breakfast. At 05:36:20 the parent arrives and there is a fight between them for prey. After a while, a rich, teenage chicken disappears in an alder crown. After the second - I can't see it, I can't hear it. At 06:12, the female arrives and waits for two long hours at the prey for the second chicken. He can't wait! This is probably already outside the nesting tree. Then her patience is over and she takes the rest of the loot down somewhere, to the premises of a local company.

At 21:22:20 the second wandering cub arrived and they will spend the night again in a pair…

At dawn, both chickens are in the nest (probably all night)! 🙂 The second chicken did not fall down, but flies - it jumps on the mother alder, like a squirrel and is only out of camera view. At 06:03:50 - a duel between the chicks for prey .. but it's more of a game. Both chickens are full from the morning. Then, the young take off again, somewhere in the branches of alder. I don't think it will take long and the second-born hawk will follow him into the branches…

At 11:06:35 another prey (it seems to be a young magpie) ..the chicken is already eating very nicely…

… Even at night there was no second chicken in the nest, which is quite suspicious. Parents seem to feed only one chick…

16.6 Yesterday a young hawk jumped on the branches and returned to the nest, today it is out of range of the camera, I have not seen it yet.

10.6. … A nest full of green twigs that (after experience with ringing) part of the camouflage? 😀

Fresh green twigs contain terpenes that are volatile and strongly aromatic, birds use them to protect against bacteria, fungi, insects and parasites.

… Thanks for the reaction .. Of course, it has been addressed several times and since it was shortly after ringing, the terpenes should, quite possibly, repel the "parasite" called man… 😀

Good job! ..The circling took place without major complications and did not disrupt the course of further nesting. At 07:25:50 the male (it's handsome) brings the first morning prey. It looks, see tail, at the young magpie thief. Mr. father partially plucks the prey and then leaves it to the chickens, inviting her to try it herself. After a while, it sits on a branch and one of the chicks goes into the prey. He struggles with a young woman bravely long minutes, but he doesn't do very well. The male can no longer look at it, he returns to the nest, takes the heel situation into his own hands and feeds the young .. well, and we are left with the so-called napotom…

5.6 Last night, the young were circling in the nest. https://www.zoocam.info/zapis/krouzkovani-mladych-jestrabu-lesnich-na-hnizde-v-lotyssku-sezona-2020/

5.6. Both hawk chickens grow literally before your eyes. Gradually, they lose their white down feathers and begin to color nicely. Barren, dead eggs, fell somewhere in "West Germany" (?) ..Or I did not register that the adults took them. It is possible that the chicks dropped them down.

Greetings Jeníček, the eggs are buried in the nest under a layer of new twigs.

In 2016 and 2017, there was also a transmission from the hawk's nest from Riga (Margo hawk) on your website. In 2018, the nest remained abandoned. The hawks reportedly relocated to another tree nearby. At the same time, it was also the area of ​​a factory, and a apparently abandoned hall could be seen nearby. However, it was definitely not the same nest as this year, because the original one was on an aspen and this year it is on a gray alder. I wonder if it is a different nest on the premises of the same factory, or a completely different location?

Thank you for answer.

23.5. ..In 05:15:40 chickens are being fed. Manifestations of aggression among the young all none, food is plentiful. The older, larger young, as in the case of eagles, has priority and the second-born rather ticks. Even so, the chickens grow very nicely and the nesting takes place in a calm spirit. The disturbing element is the man and his industrial area below, which demonstrably does not bother the nesting birds .. Some species can holt adapt, and even benefit from the presence of man…

17.5. At 09:55:00 a bird is being fed on the nest. Both chicks are already pretty bastion and two barren eggs are still lying in the basin, from which the chickens will undoubtedly no longer hatch…

12.5. At 07:30:40, a smaller hawk male than a female brings hard-to-identify prey to the nest. She takes food and feeds the young. There are still only two chickens and it's hard to say if there will be any more chicken.

10.5. At 04:52:38 breakfast. It is a calm spring morning and the tiny chicks are trying to swallow even smaller bites. The other two "chickens" are still outside the shell and hopefully they will soon be able to see the light of day…

7.5.2020 Thank you, I learn that a couple of forest hawks have their first chick in their nest. The nest is in Latvia near Riga. It is from where the sea eagle's nest is far away. The hawk attacks from last year keep coming back to me. He is extremely fast and brave. Feeding the four young will give him enough work.

6.5. At 13:08:08 alternation in incubation. There are still four eggs in the basin, even here it somehow doesn't want to hatch…