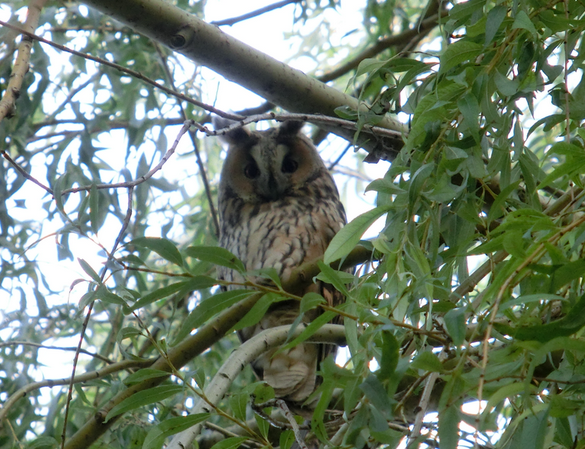 The project of live transmission from the nesting of sludge is implemented by the Czech Union for Nature Conservation Břeclav for the third year in a row. In 3, the calli in the booth brought out 2018 chicks, in 3 they managed to bring out 2019 chicks. It was interesting that after the calluses, in 2, the common kestrel managed to nest in the booth and they successfully brought out 2019 young.
The eared owl is one of the relatively abundant owls in our country. Nevertheless, few people know them - we do not see them at night and during the day they use their perfect camouflage coloring on the trees. These owls do not build their own nests and use, for example, abandoned nests of crows or magpies. In the Břeclav region, however, the calouses began to use booths years ago, which were originally prepared by the Union of Nature Conservationists for Kestrel. Because they were interested in how the nesting of calouses actually takes place, they made one special booth with a camera inside. The second camera captures the booth from the outside and thanks to that we can watch what is happening in and around the booth together.
Kalousi begin to nest in early spring, females most often lay 5 pure white eggs and heat them for about 28 days. Because they lay eggs at two-day intervals and sit on the clutch from the second egg, the chicks hatch gradually and the age difference is well recognizable on them. The date of commencement of nesting is influenced by the course of winter, the availability of food and also the age of nesting birds.

Thank you to webcam operators:
https://www.budkyonline.cz/

19.00 interesting, one flew out of the booth and the female immediately arrived, but the eggs nowhere and she also found no food

5.3. 18,23 the cameras are coming to us again, they can't be returned so we can hear them honking

2.6 little ones are beautiful, it's good to see them in the booth, it's a pity that the record can't be returned