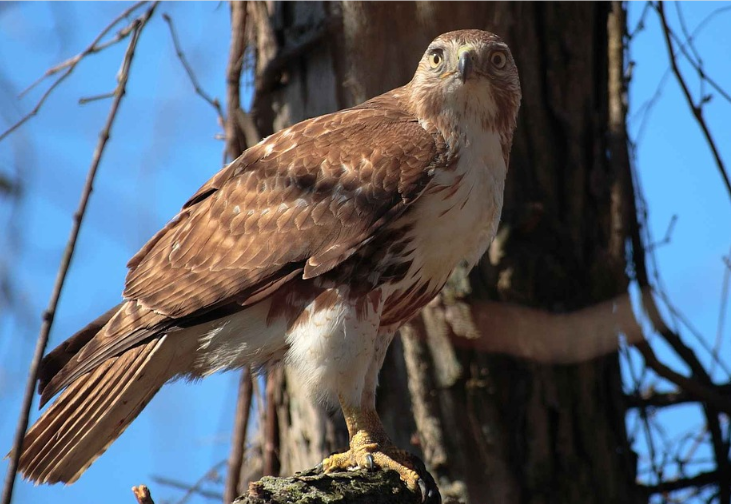 The Red-tailed Canal is a medium-sized predatory bird of the hawk family. It breeds almost throughout North America ranging from western Alaska and northern Canada to Panama and the Caribbean and belongs among the most abundant North American hawks. It occurs in 14 subdirectories that differ in color and area of ​​extension.
The reddish canary tree grows 45 - 65 cm and measures 110 - 145 cm in the wingspan, while females are on average about 25% larger than males. The weight in adults is usually between 690-1600 g. It is brown above, the lighter is lighter with pronounced brown sprays and the tail is characteristically brick-colored.
It occupies a wide variety of locations at different altitudes, including deserts, pastures, coniferous, deciduous and tropical rain forests, farmland and urban areas. It is protected in Canada, Mexico and the United States.
In particular, it eats small mammals, but also birds, reptiles and, more rarely, bats, snakes, fish, crustaceans and insects. The composition of her food varies according to the area and season, but 85% of her food usually occupies rodents. It's monogamous. She puts 2 - 3 eggs on which she sits for 28 - 35 days.
Thanks to its still relatively high abilities and easy training, it is often used in falconry. It is also of importance to some of the original North American tribes, who considered her to be sacred and used them in religious ceremonies.

It was a wonderful sight when she fed it.

1.042 mom gave us a beautiful spectacle

Super shot !! Thanks Heli for the alert

9.07 is already the second club

10,55 beautiful view of the young, the shell is out of the bowl

9: 27 close up, probably there will be PIP, it's hard to know how the eggs are dirty

The female is getting up more often and as if the eggs are listening, it will not take long

Petro, can we just wait for bobbies too late here? ? 😉

Jani today is 29 the day the female laughed the egg, the hatching of the rudoocasate buck is 28-35 days, we can wait for the PIP on the egg any time.

24.3. beautiful green nest, eggs are often not seen, slowly the pups could turn out