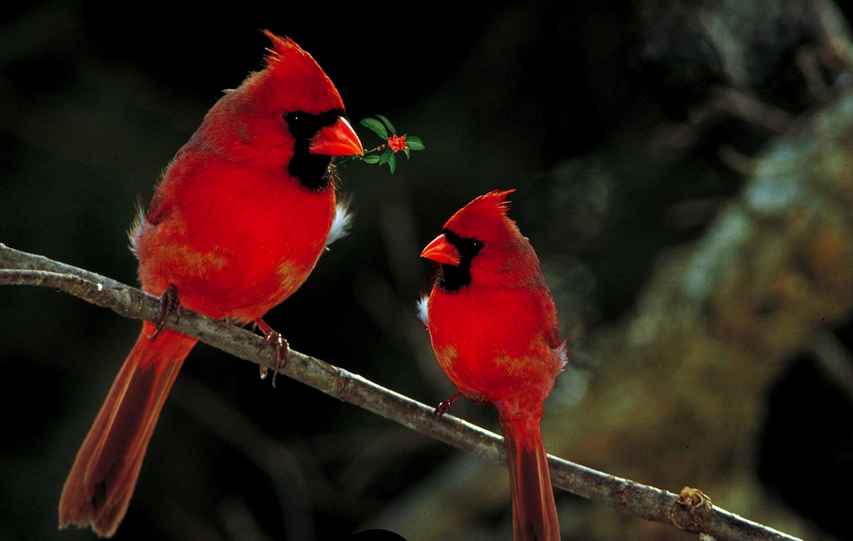 A nest of red cardinals is located in a private garden in Texas, USA

We thank the operators of the webcam

The Red Cardinal (Cardinalis cardinalis) is a 21-23 cm long songbird from the Cardinal family. It occurs on forest edges, in parks, gardens and near swamps in southern and eastern North America, specifically in Mexico, Belize, Guatemala and the Bermuda Islands.
The male is crimson red and has black plumage at the throat, the female is yellow-brown olive. It has a strikingly long tail, a thick pointed beak suitable for breaking harder seeds and a erect plume on its head.
The Red Cardinal is an omnivore, but its main food component is plant food (seeds, fruits, flowers, leaves and other parts of plants), occasionally catching smaller insects. There is a voice of distinctive and melodic tones. The male is territorial throughout the year, the most aggressive at the time of reproduction. In courtship, the male inserts a mature fetus into the female's beak and waits for the female to accept it. It has 2 to 4 cows per year, with one egg usually having 3 to 4 eggs.
In the past, he was a very exclusive pet in America, but at present, the illegal breeding of Red Cardinals is strictly forbidden.
Red Cardinal is a state bird in Illinois, Indiana, Kentucky, Ohio, North Carolina, Virginia and West Virginia. It is a symbol of St. Baseball Club. Louis Cardinals and Arizona Cardinals Football Club.

12.8 So it's a fluff… two chicks have already left the nest!

Camera date 8.8. time 05.32- the female feeds, then arrives after ten minutes with other worms. The young grow beautifully.

3.8. The little ones have a beautiful mother and an artistic nest

20.5 New camera - there are four chicks in the nest

26.4 There are already cubs

Beautiful birds, it looks like they are nesting on a fan…

YOU ARE A MISS OR MRS.