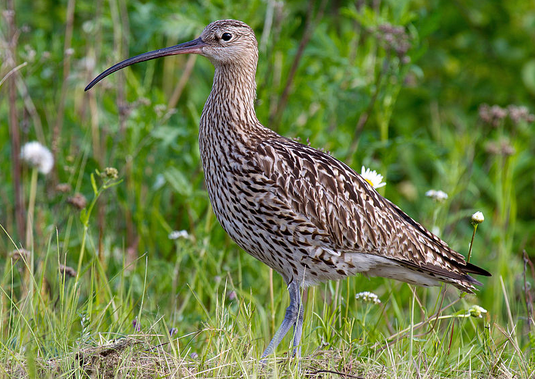 The nest of the Great Crested Grebe is located in Wales.
The great crested grebe (Numenius arquata) is a large species of marsh warbler. The largest species of marsh within the entire distribution area (body length 48-57 cm, wingspan 89-106 cm), with long limbs and a long, downwardly curved beak (longer in females than in males). The plumage is gray-brown speckled or striped on most of the body, white on the skeleton and lower tail rafters, and black on the upper side of the wing. Both sexes are colored the same, young birds have only longitudinal and finer spots on the sides. It nests in Europe and Asia. Mostly migratory, wintering in northwestern Europe, the Mediterranean, Africa, the Middle East, South and Southeast Asia, Japan and the Sunda. It nests mainly on wet meadows and pastures or in swampy taiga. It draws mainly in muddy shallow waters and coastal areas. It feeds mainly on insects and ringed pests, but also eats crustaceans, molluscs, spiders, small fish, amphibians, berries and seeds. The nest is on the ground, hidden in the grass. In one clutch, 4 (3-5) 67,9 × 47,4 mm eggs are usually large.

Thank you to webcam operators: https://www.carnyx.tv/

3.6 - 16:40 three chicks in the nest - tomorrow the ornithologist should circle them, as the chicks remain in the nest after hatching for only 24-48 hours. Then they go for food, their parents do not feed them.

3.6 Chicks begin to club in the nest of a great crested grebe.

There is a trumpet that happens to me, but there is a whirlwind.

Hello, I am a trumpet, I have the same number corresponded to the courtyard.

11.5. 16:45 - Koliha sits quietly in the nest. One would slowly fall asleep. The grass around is rustling and… Nothing else happens: D. But she is pretty, it must be acknowledged 🙂