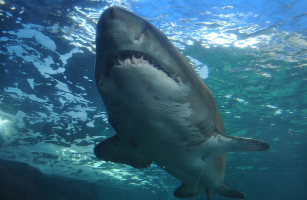 Sharks are predominantly predators, inhabiting most of the seas and oceans on Earth. Some of them also occur in brackish waters at the estuary of rivers and penetrate into their lower streams, and there have been a few species that have adapted to live in larger sweet lakes.
Sharks are very well adapted to water movement. They have a torpedo, sometimes a serpentine body. Their breast fins are not associated with a cartilage that is cartilaginous, but there are signs of bone formation.
They are aquatic predators (with the exception of several planktonožravých species), the largest proportion of their diet is made up of fish. But it basically hits all marine animals and seabirds, the fins.

Naturally, many human attacks are known, most of which are based on the fact that it was not an attack on humans as such but about the confusion with other objects the shark otherwise attacks (eg seals, etc.)

This is a nice day here, a big flock of fishes and sharks