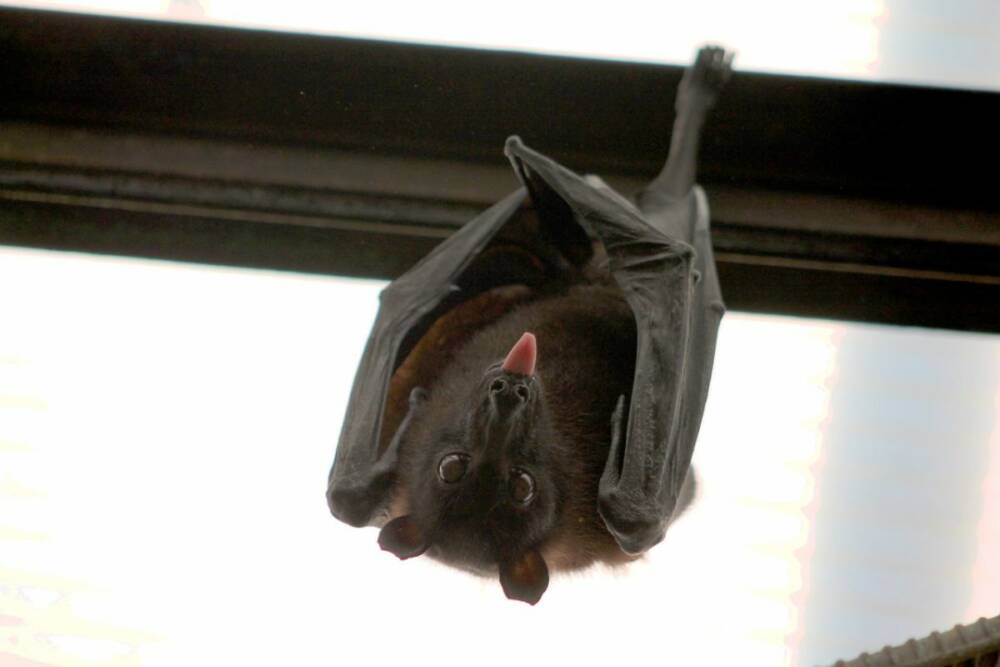 Online broadcast from the Lubee Bat Conservancy, an international non-profit organization dedicated to rescuing bats and bats and their habitats through research, conservation and education focused on the involvement of children and the community.
The camera Mixing Species Flying Fox shows 5 of the 13 species of fruit bats in the rescue center. You can observe the following types of fruit bats on the camera:
Malayan Flycatcher, Coastal Flycatcher, Miller's Flycatcher, Rodriguez Flycatcher, Golden Flycatcher

Kaloni:
Kaloni (Megachiroptera) are one of the two suborders of aircraft, which is a group of mammals, which also include bats. They include a single family, the fruit bats (Pteropodidae). Despite their large size, the bats are very light and even the largest bats weigh only under two kilograms.
The calf body is similar to the body of bats, but its head is strikingly similar to the fox head.
Water lilies ensure the transfer of pollen from several hundred plants. Water lilies are mainly herbivores and feed on sweet fruits. They fly out for food during the day, in flocks or alone, then settle on a fruit tree and eat fruit. Stems and seeds spit out carefully.
Some fruit bats even preferred to eat nectar and pollen from tropical flowers that are available throughout the year. These planes fly in flocks for about twenty, then circle around the plant and shoot a long tongue individually to taste the nectar. Once the food is depleted, the flock is moved to another plant. Unlike other fruit bats, these do not inhibit, but fly all year round and still feed. They help pollinate plants and facilitate seed formation.
Kaloni use their big eyes for orientation with echolocation. Ultrasound is transmitted using the language that they click on. Calons secondary to laryngeal echolocation.
Some species of fruit bats are probably behind the origin of the dreaded Ebola virus, which causes bleeding fever (the deadliest types of the virus have up to 90% mortality). Transmission to primates may have occurred through contaminated fruit. Marburg virus is also associated with them.

Thanks to webcam operators:
https://www.facebook.com/LubeeBatConservancy

Squirrel - webcam from the pens

Outbreak of rhinoceros and juvenile

Hello Petro,
I recently watched bats on TV, so I just tried to see if there was a webcam on the net to watch them and I found this, but it doesn't describe when they nest, when they have young, I wonder, and how gives birth, just as we observe eagles, eagles, kestrel, can you send me some info? I would still like to know if there is also a camera somewhere in nature, so that bats can be observed not only in captivity, thank you very much in advance

Good evening Dáša, the bat camera was only released in Estonia for a while, but it is no longer online. Here is a link to the forum: https://www.looduskalender.ee/forum/viewtopic.php?f=114&t=1001
The pages about captive fruit bats that we watch on Zoocam are here on FB: These are not bats, but fruit bats. https://www.facebook.com/LubeeBatConservancy
Or on Twitwru: https://twitter.com/batconservancy
All information can be found on the net, e.g. https://cs.wikipedia.org/wiki/Kaloni
https://cs.wikipedia.org/wiki/Netop%C3%BD%C5%99i
I also added some info to the camera.
Occasionally there is a fruit bat at night on a new camera we have on Zoocam, it is a bird feeder in Africa - link here: https://www.zoocam.info/ptaci-krmitko-jihofricka-republika/

Hello Marcelo, do you mean that brown-and-white fruit bat? If so, it's not a cub, they have more species of both fruit bats and bats in the rescue center. I suspect that they have a total of 13 species there.

Good evening Petro, yes it was the brown and white one 🙂 it was smaller, so I considered it a cub. Little did I know that there were so many species, and I couldn't even recognize them. It's not that simple for them, you can't see much of them 🙂 🙂 Thank you

Nice. It is a pity that some animals are not very popular with humans.

19.4. it is rumble when it rains and the kid has to lick water and it doesn't have wings yet

Are you watching the kala? They are great!

Sprockle, he had to be emptied when I visited them.

He is still alive, one "fought" with his reflection, the other trying to get in the basket, probably drinking water, much washing, screaming and flying. Those cameras are perfect, they can watch that interesting.