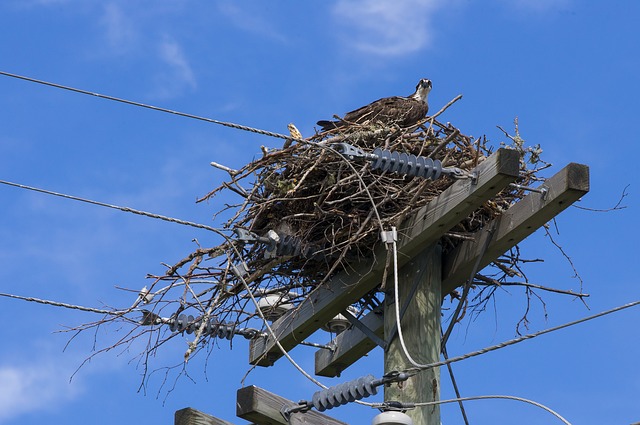 In 2014, the river eagle built a nest at the top of the monument. Unfortunately their nest in which the egg was destroyed was a storm. A threatened couple returned and began building a new nest.

As the staff of Achiveva was afraid of the previous disaster, they built a new nest in a safe and convenient place for orbits.
The male is called Jack and Dianne.

Wiki: Males and females are quite similar, the difference between adults is the leaner body and narrower wings in a male. Different is also the chest, which in males is weaker than in females and plumage of the lower part of the wings, which is more even in the males. It is easier to identify sex in a couple than a self-living individual.

11.4.- 10:31 AM Older pups are eaten, their wings are stretched and the female feeds her youngest sibling. They are all beautifully colored. 12:03 PM It's raining a lot, Dianne hides the chicks under her wings.

2.4. it seems that they already have enough food, practically all day they feed and bastion even the smallest one

31.3.2021 Here the youngest young starts to starve, the older ones do not let him eat, today he took a few bites while feeding at 04:39, that is very little. They don't have enough fish.

20.3. 7:48 Jack brings a beautiful fish again, but the feeding is no longer as comfortable as before. The oldest cub is already pushing aggressively when feeding

Beautiful feeding and without fights, eagles have pretty full ruffles and rest after meals.

10.3. 7:28 Jack brings a big trout for breakfast, followed by feeding…. All three chicks are given