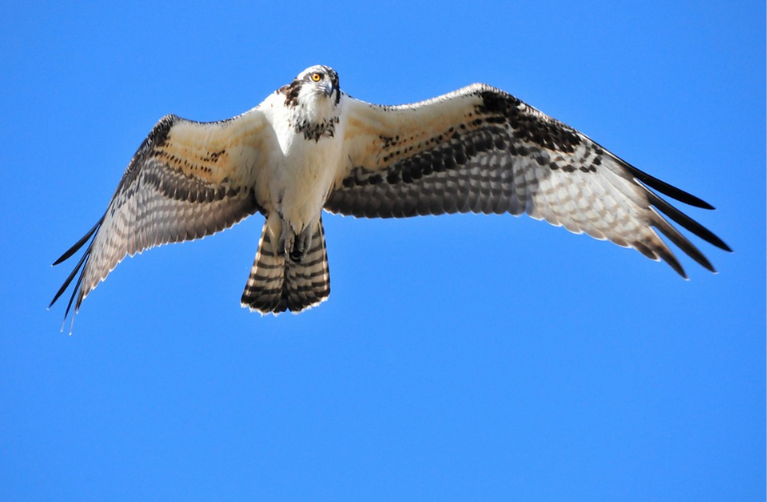 The Orlovec River is a bird of prey from the family of orbits, which is also the only species of this family. It is a medium-sized predator with a length of 55-58 centimeters and 145-170 inch wingspan. It has brown plumage on the upper body and gray-white plumage of the head and lower body with a wide black stripe across the eye.
The Orlovci caters for a wide range of habitats, living mainly in the vicinity of seashores and inland waters (lakes and larger rivers)
where he has a sufficient supply of food. It can be found on all continents except Antarctica, although it occurs only in South America as a migratory species.
The total European population is estimated at about 9 of a thousand pairs.
Eagle's food is composed almost exclusively of fish that fish at the surface of the water surface. The hunting of the food is adapted to both the physical characteristics and the unique behavior of the hunter
and catching prey. As a result of these unique properties, he is a representative of his own taxonomic family and family.

About the nest:
During the autumn of 2014, a few virgin breeds began to visit this deserted nest, where it originally nestled a pair of bald eagles.
The nest is located 25 meters above ground on one of the six international certified golf courses in The Landings,
on Skidaway, near Savannah in Georgia ..
In the course of the year 2015 and 2016 a few breeds were bred by four youngsters, but 2017 did not return to XNUMX.
Instead of a owl, 2017 had a few orbits in the river.
The female lasted three eggs at the turn of March and April. 5. May 2017 hatched the first cub.
14. In May, the nest was attacked by an aggressive eagle and juvenile
the consequences of the injury died.
The other two eggs were not viable.
25. May 2017 eggs broke and ate a crow.

In 2018, a pair of eagles began extending the nest on February 6. In 2019, the dry tree that held the nests was removed due to the danger of falling. A new nesting site was built on the adjacent tree in the autumn of 2019, and the eagles quickly settled in the new location in 2020.

Thank you to webcam operators:
https://www.allaboutbirds.org/cams/savannah-ospreys/

Squirrel - webcam from the feeder

Alkoun General webcam from the nest

That was a fluff, I wasn't expecting an egg until next week. Thanks for the alert Marcelo. Have a nice evening 🙂

There are two eggs there and they will slowly roll