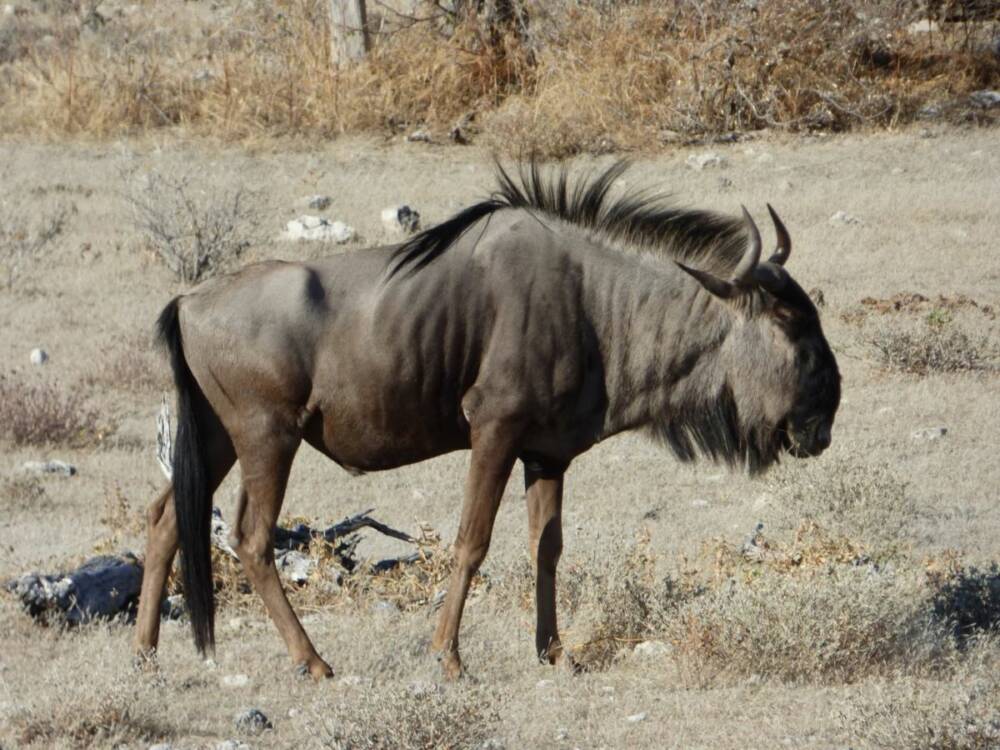 Wildebeest belongs to the antelope, to the family Turidae. It reaches a height of 115-145 cm and a weight of 168-274 kg. He has a long tail, mane and chin. It occurs on open grassy plains and in the bush. Males have larger horns and are generally larger than females, and their color is darker. Adult wildebeests are colored from light gray to gray-brown. The pups are yellow-brown by 9 weeks.
During the dry season it creates huge herds and undertakes water and food migrations up to 1 600 km long. They are prey mainly for lions, cheetahs, hyenas, hyenas and crocodiles. Upon escape, wildebeests can reach speeds of up to 80 km / h. In nature they live to live around 20 years.
Males are very territorial and, during migration during the breeding season, occupy an area of ​​size 0,02 km2, which (relatively aggressively) defend only a few hours or days. They leave them as soon as the herd sets in motion, setting up a new one at the next stop. They try to attract as many females as possible, which then defend against other males. Young and non-territorial males are grouped in bachelor groups.
Wildebeest are very loud animals, especially at the time of reproduction constantly make some sounds such as snorting, roaring, grunting etc. Territorial males also use different attitudes to intimidate the rival: raking hooves in the ground, rolling on the back and roaring to show their dominance .
Wildebeest often associate in numerous herds together with ribs or ostriches, for both species it is advantageous. Zebras have better eyesight and wildebeest have excellent hearing and smell, so together they have a better chance to detect the presence of a predator in time.
Mating of wildebeests begins at the end of the rainy season. Pregnancy lasts 8,5 months, the baby is born in the middle of the herd, about seven minutes to get to her feet and in two hours can keep up with the herd. They stay close to the mother who protects him. All pups are born within two weeks, creating an excess of prey for predators that they are unable to catch.
Wildebeests feed mainly on grazing grass. They need to drink almost every day, so they must be near a water source. They play an important role in the ecosystem because different species of herbivorous animals prefer different grass heights when grazing. Buffaloes graze the highest grass and thus make it available to the zebras, which only save it to a certain height. It is bitten by wildebeests and eventually by antelopes grazing grass to the ground.

The jewel of the European lowlands The Eagle Royal Documentary

A documentary film about tigers, rhinoceroses, and rhodes

Poisonous animals around us documentary film