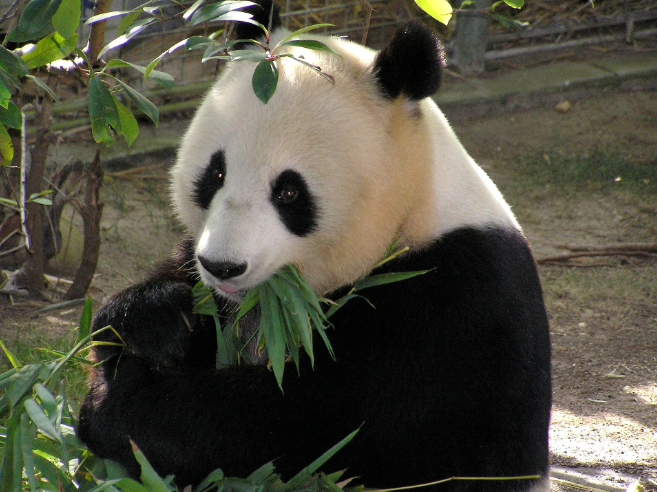 Big Panda is a mammal in the family of bears. He lives in the mountainous areas of the central part of the People's Republic of China, such as Sečuan. From the second half of 20. century, the panda has become the national symbol of China and is depicted on Chinese gold coins. In September, 2016 shifted to IUCN from the category of endangered species to vulnerable.
The big panda lives almost continuously inside bamboo thickets. Although it is among the beasts, its food is predominantly plant. Its digestive tract has a rather common structure for carnivores, but a unique bacterial microflora in the intestines allows it to digest this difficult food without difficulty. Professionally, he is a omnivore because he is known to occasionally feed eggs and meat and with bamboo he also consumes some insects. They are the necessary sources of protein for it. When she chews her ears are shaking.
Her paw is very unusual; with "thumb" and five fingers; The "thumb" is actually a modified bone of the wrist.
The adult panda weighs 70-160 kg, it is long 1,2-1,6 m. The tail pandas is short, only 12-13 cm long.
Males and females meet in the spring, from mid-March to mid-May. They stay together for only a day or two, during which time they mate several times. If one male females are interested in more males, the strongest will eventually become her.
The young are born in September, after 100 to 160 days of gestation. One to three tiny cubs are born very underdeveloped. They weigh 90 - 130 g, a 45-day pregnancy would theoretically suffice for their development. Thus, as with some other animals, embryonic development is not thought to begin until the egg is trapped in the uterine wall. For several months, the baby's only food is breast milk. It starts to feed on bamboo in 5-6 months. It is usually weaned in 8-9 months.
Panda is not agitated and captivated by 30 for years.
Wolong Panda Center in Gengda

There's one panda on the camera number 3 and it feeds with bamboo :-) It's got it too :-) And why do not the two cameras go?

It sends a record on them, usually when it starts, the transfer will fall. It's fixed, but only records are going.

And how many are there?

Emo does not write anywhere how many youngsters are there.

These are pets :-) How are the cute :-) And hairy :-) I think this camera will be among the best except Romeo and Juliet :-) Really thank you to Petr Chumlecka :-)