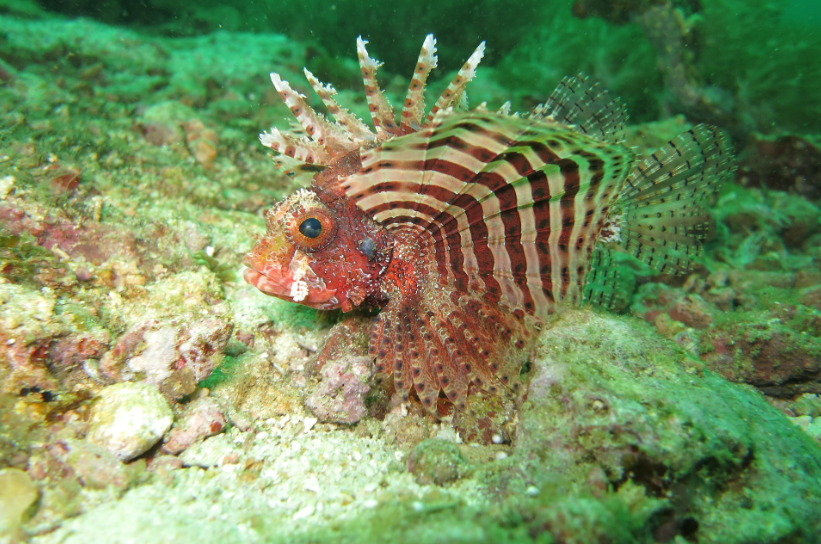 Lionfish is a poisonous predatory fish of the family of the roachbeard.
It occurs in the Indian Ocean and the Pacific Ocean. It is inhabited by coral reefs. Over the day it is hidden under the overhangs and in the cavities.

It is a reclusive fish that lives in smaller communities only during the youth or at the time of breeding. In adulthood, it is a heavily territorial fish that defends its territory, both from foreigners and individuals of the same species. Possible intruders blame their appearance or poison. Lobsters are much more aggressive than females.
Lionfish has shattered, rays of fin (almost spines), a fiery striped color that serves to camouflage, but also warns predators that it is poisonous. The Jed is hiding in its spines - when touching the thorns, the upper part of the body where the poison is injected is disturbed. Although one dose of this venom may not be fatal to a person, the injuries are very unpleasant and heavily heals. Jed used only for self-defense. Luthered part of the day spent lying in the skulins and under the overhangs of rocky or coral reefs, and is then shown to predators and therefore to divers who can get very close, but when a lionfriend feels in danger, he can use poisonous spines. Lionfish prefer hunting in low visibility. He pours his prey with a steep suction (he opens the mouth to which the water and the prey flood him). This prevents an unnoticed approach or blocking of the road with fins and narrowing.

Perutýn is a lonely fish, which is released in the society of other individuals only during reproduction. During the reproduction period, it changes its appearance. The male ones darken and their stripes partially disappear, their surface being less varied. In contrast, the females at the time of maturity of the eggs are fading. In the area of ​​the abdomen and muzzle, they are then silver-white in color. At the beginning of the dying, the male starts to court. Once he finds a female who recalls his courting, they will come closer to the sea surface where the sexual act takes place. The female releases two volumes of large eggs (2000 to 15 000) into the water, which are fertilized by the mites emitted by the male. The fertilized eggs are then carried by sea currents into a wide area. Initially, they are linked to each other and, over time, they are divided into smaller units. Approximately 12 hours after embryo embryo will begin to form. After 18 hours, the head and eyes develop, and a whole larva is formed after 36 hours. After four days, the larva can swim itself and receive food alone.

Lionfish is a predatory fish, which mainly fish small fish, crustaceans, shrimps, crabs or shrimps in the dark when the activity of life is highest in coral reefs.