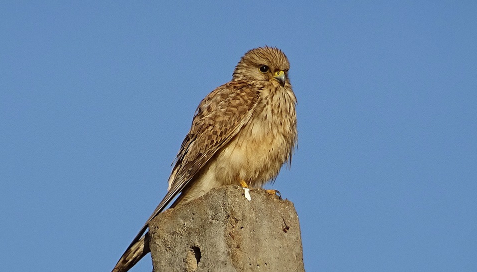 The nest is located in Budapest, Hungary, part of Buda

Common Pox is a small representative of the order of predators. The kernel wingspan is in the range of 70-80 cm. Poxtail is a small falcon-like predator slightly larger than the wild dovecote. In the sky he has visibly pointed wings, often living in cities and is the most numerous falcon predator.

You can recognize the pox by their flying flight, keeping them in the air in one place, looking for prey and attacking it after a dive. This way of hunting distinguishes it from a similarly similar crab, but when hunting it is flying low above the terrain and the silhouette of the wings has a dull ending at the crouw. Poinsetts quickly waving their wings in flight and after a few strokes they take a break. They have a wide tail when swirling.

Cats do not build nests, they use nests of other birds (especially strak and crows), as well as various raised cavities, cornices and niches of buildings where they bear the eggs for which they merely squeeze a dent in the original material. In recent years he has been nesting often on the blockhouses in the housing estates.

15.6. the two are doing well so far, hopefully they will last

Thanks to Petro, that's terrible, last year all the chicks died on this nest and now this is a bad year, the brightly colored kestrel had 5 eggs and the camp disappeared, the black stork also left the eggs, the bald eagle in Florida 2 chicks, also that the new one has survived and they are already big, the common kestrel did not return to that one nest, in Děčín the company did not transfer falcons that have a booth on the chimney of the heating plant, eagles also have fewer young this year, now eagles are preparing their nest in Sydney, so we will to have something to look at, in Hungary the kestrel is still sitting on the eggs, whenever the little ones hatch, also that we have you for info, thanks, thanks

This year, the nests are not really successful. The falcons managed to raise their young only in Baltimore, and there are perhaps 6 cameras from the falcons' nests on Zoocam. Red-legged Kestrel should hatch its cubs every day, today it is 29 days since the first egg was laid. Here is a new nest of kestrel in Slovakia, but the transmission often falls. https://www.zoocam.info/postolka-obecna-webkamera-z-hnizda-slovensko/

Hello Petro,
where are all the chicks, are there only two still visible? Thanks and have a nice day, and I came up with a new greeting, as they say, have a nice day, so maybe it's better to say nowadays, have a good time

Hello Dasha, unfortunately three cubs died. Two on Saturday and one yesterday during the storm.

Hello Petro,
thanks for the info, i'm sorry before the parents sit down, so it's almost a month, then the time is fed before they grow a little and now this, it's a shame, too, that mum was weird where they are and my father is completely lost

"The last two remaining young kestrel from the nest died today. One of the dead bodies in the nest lay next to the flowerpot, and the other dead body was in the park next to the house. The young developed well, colored feathers appeared, the squadrons were almost completely developed, the down feathers almost disappeared. However, it is possible that the female brought food that had been poisoned by a pesticide to determine the cause of death, the carcasses of the chickens and prey, and fresh discards left at the breeding site are transported to the University of Veterinary Medicine in Budapest to investigate the pathological examination of their deaths. . There was also the question of whether the chickens could get sunburn, but this is unlikely because the temperature was 26-28 ° C.

Hello Petro,
now my mom's bastard and little kestrels nowhere, they weren't there that evening, don't you know where they went? Poor people, they didn't get much food even though there were only two left
9.6 07.00