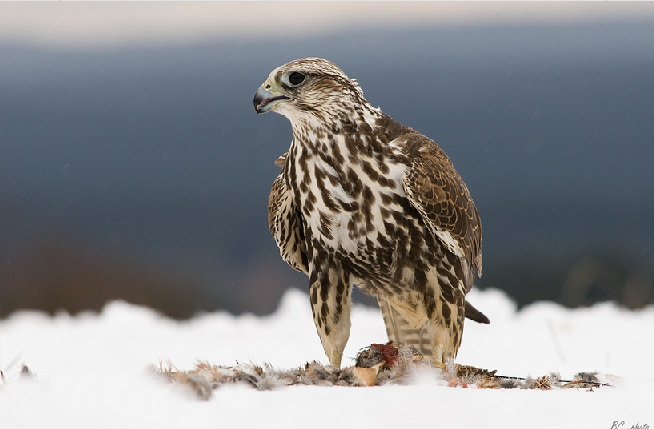 Falco cherrug is a threatened predator of the Sokol family. It ranges from eastern Europe east through Asia to Manchuria. It is predominantly towed, wintering in Ethiopia, the Arabian Peninsula, northern India, Iran and western China.

Large Sickle is a large predator of growing 47 - 55 cm with 105 - 129 cm wingspan. Above is predominantly brown with gray squadrons, the top of the head is colored brown. The bottom of the body is bright with brown sprays on the stomach. Both sexes are very similar, young birds are more obscure compared to adults.

It inhabits open landscapes with sparse trees. They feed mainly on rodents and birds, which they hunt by direct pursuit. It nests on the ground, bare ledges or in abandoned nests of other larger birds on trees. It lays 3 - 6 eggs.

The Great Squid is currently rated as an endangered species. The reason is a rapid population decline that is particularly noticeable on the Asian continent. Its greatest threat is the loss of natural habitat and hunting.

Thank you to webcam operators: http://mavir.hu/web/mavir/feszekmegfigyeles?fbclid=IwAR3deETBMbgByXYe6rmQKGD985SRqJytipRmuj_U9FSkKJnQ5vop0qtJz6U

17.26 I see the female for the first time outside the nest and one egg. Too bad the bar can't be moved here. She talks about feathers, she's pretty.

The egg was not viable, it is already here after nesting.

what lies next to the parent of the dead as a big predator, so it was not one of the parents ???

Nothing's there. It was a female wing

What lies next to parents ???

Where? Unable to scroll timeline…. I only see a female in the nest, but they should have young there by now.

I think they already have two little ones

13.3 Here they already have three eggs

5.3 Camera online again! Unfortunately, the transfer cannot be returned in the timeline.

26.4. there is enough heat over 26 C, dinner has not yet arrived 19,15 so we are waiting. There are still two eggs, so I missed one, I hope the little ones are still three, they are not visible.

20.4. 18,40 / 45 Mum didn't pick up, so little girl showed herself. But then she interrupted her mom and ran screaming out of focus and there were three girls and one egg in the nest. And because she started feeding, Dad brought them something and that's why the screaming. It is a pity that it is not possible to return and that is why I mentioned the time to feed it next time.

This year, Raroh has been in the booth, they have the first egg!

6.3. A 17,40 female on a nest prepares a bowl, a male flying around. It looks like the female in the booth will even sleep. It is a shame that you can not return camera shots.

Upload online again! Instead of perch, Raroh flies to the booth this year - the transmission cannot be returned in the time bar