The raven took the raven's egg to the black storks in Poland! 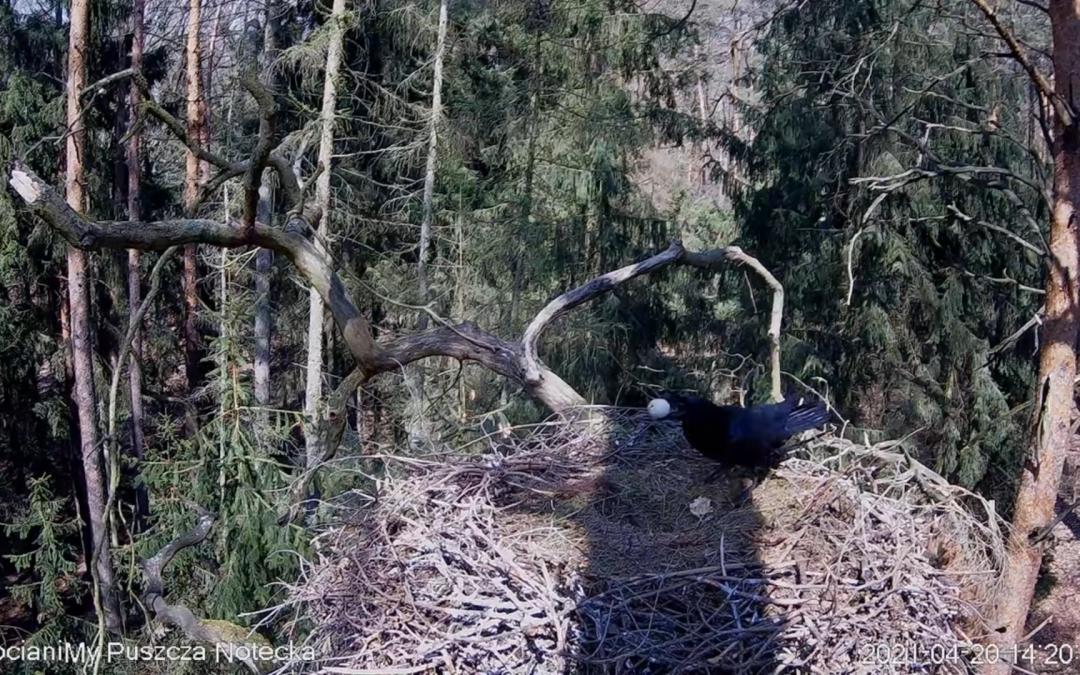 The nest of black storks is located in a protected area in the Polish Noteć Forest near the village of Sierakow. The camera was set up in mid-March 2018, before the arrival of the storks. The nest on the oak has been occupied by birds for 4 years. In 2019 and 2020, storks raised three chicks on the nest. Unfortunately, the oak is completely dry and the nest is very heavy and on a dry branch. The camera was placed on an adjacent pine tree. Online transmission from the nest is provided by the Committee for the Protection of Eagles in Poland.

The black stork is a large, mostly black bird with a bronze luster, a red long beak and a white belly. There is almost no difference between a female and a male. The chicks are dull brown with a gray-green beak.
This shy, rarer inhabitant of mountain forests, hills and floodplain forests lives individually and very secretly. The nest of sticks and branches is usually hidden in the woods in the crowns of old trees or on the rocks. It is widespread in most of Central and Eastern Europe and in milder areas of Asia as far as the Far East. European and West Asian populations migrate to Central and West Africa for the winter, others to India and China.
They feed mainly on fish, which they catch mainly in smaller watercourses. But they also hunt frogs, salamanders, aquatic insects and snakes. It usually lays 3-5 eggs, from which young with white down hatches hatch after a month. Both parents take turns warming up. The incubation period for eggs is 32-38 days. However, because the parents usually sit from the first egg, the total sitting time is 35-46 days. Both also give chicks on the nest for at least another two months - up to 73 days. At that time, the chicks are already able to fly, but they remain on the nest for about another two weeks, where their parents feed them. They reach sexual maturity at the age of three. The black stork is a monogamous species - it has a permanent partner during the nesting period. In individual years, however, it alternates its partners. They live a maximum of 18 years in the wild, in captivity the highest measured age was 30 at an individual in the London Zoo.

Nesting 2021 - Beginning of the season with black storks in Sierakow

March 30 The arrival of the male on the nest
April 8 arrival of the female
The female laid the first eggs on April 20
On April 20, the storks left the egg unguarded, the raven used it and took the eggs from the nest. 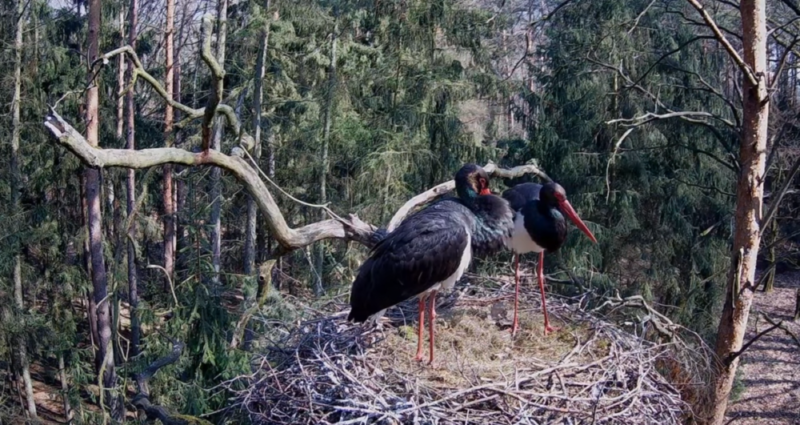 Stork pair on the nest - beginning of the season 2021


The raven carries the egg from the nest