In the nest of Bald Eagles in the Big Berar Valley, female Jackie laid a second egg 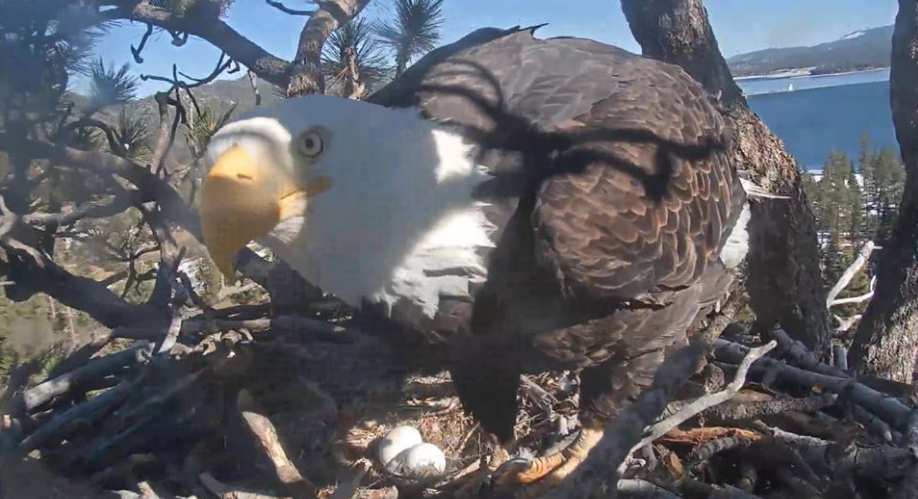 This nest is located in the San Bernardino National Forest of Southern California. It has been actively used since autumn 2013. The area is closed during the nesting season to protect eagles - bald eagles are known to leave their nests when disturbed by humans.
The camera and sound system is powered by a solar system and runs live - available 24/7

Historically, bald eagles have only wintered in the Big Bear Valley to find food sources (waterfowl and fish) that are not available on frozen lakes further north. Recently, however, the female stayed at the site all year round. In 2012, a female bald eagle hatched in the Great Bear Valley. The eagle pair successfully raised her.
Friends of Big Bear Valley is a 501 (c) (3) non-profit organization.
BIG BEAR VALLEY is the 7th most biologically diverse place in the country!

The aim of Friends of the Big Bear Valley is to maintain intact beauty and unique surroundings
this very special place.
Protects the amazing natural environment through environmental education and promoting its value and benefit to the community. The 24-kilometer-long Big Bear Valley with its beautiful lake is located inside the San Bernardino National Forest in Southern California.
You will find irreplaceable, unique habitats: Some habitats exist only here in the Big Bear Valley, and each habitat hosts its own diverse species.

The first in recorded history is the active nest of bald eagles in these mountains.
Here you can see plants that do not exist anywhere else in the world! Rare and wonderful species that exist only here.
Fascinating, observable animals, including rare or endangered species: A wide range of birds, mammals, reptiles, amphibians and fish, and even beautiful insects that do not exist anywhere else. 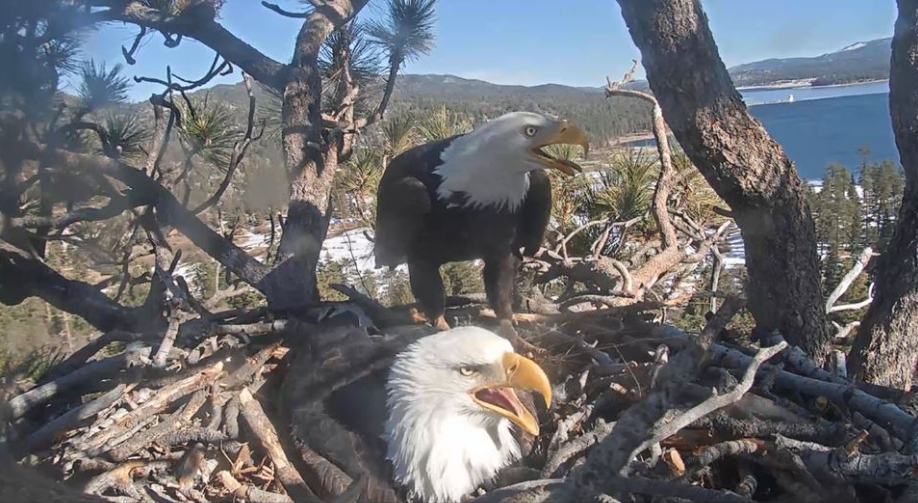 Since the Forest Service began to count eagles about 30 years ago, bald eagles have come to Big Bear in the winter to find food when their home lakes are further frozen north. Around 2009, however, decided to spend the summer in the valley marked young eagle from the island of Catalina. We don't know if it was him or not (he'd lost the mark since then), but the couple began to stay in the Great Bear Valley all year round and build a nest on the north side of the lake.

In 2012 the Great Eagle Valley hatched the first eagle chick in recorded history. Her parents were named Ricky and Lucy. The cub was named Jack (after a long time volunteer). Before the chick came out of the nest, it was larger than both of its parents, which meant it had to be a female. So Jack's name changed to Jackie. Jack / Jackie wasn't ringed, so we don't have a real way to find out what happened to her or where she went.
The original nest was on top of a dry tree. Thanks to the combination of strengthening the wings of the chick and a large wind storm, the nest fell after Jackie flew.

Ricky and Lucy built another nest about 50 meters from where Jackie hatched.

Lucy laid the eggs in this new nest in 2013, but the eggs did not survive the extreme cold weather and did not hatch. Next year they had 2 chicks, but neither survived a four-day rain and snow storm.

In 2015, Ricky and Lucy raised 1 chick in the nest. The young fluttered successfully from its nest and was named Shadow. We have no way of knowing if it was him, but one juvenile bald eagle, at the same age, was seen next year and a half past the valley.
In autumn 2015, Friends of Big Bear Valley installed a camera to the eagle's nest. Ricky and Lucy, who had not known for several months, found a more protected tree and built a new nest about 400 meters from this. They successfully raised 2 chicks - named Midnight and Sky, while the camera nest was empty.

After the 2016 season, Ricky and Lucy apparently left the area. Since neither is ringed, we do not know where they went or what could have happened to them. None of Ricky's and Lucy's four chicks were tagged or ringed, so we can't know where she might be.
Ever since Jackie came out of the nest, there was an eagle in Big Bear every year, at the right age to be Jackie. Because the only other bald eagles in the valley during the summer were Ricky and Lucy,
the organization concluded that this eagle could be Jackie. In 2017, when Ricky and Lucy started appearing in an abandoned nest, they named her Jackie, thinking that it might have been the first chick, though it can't be said for certain, and maybe it's even unlikely because chicks usually leave the hatching area .
Yet the name has been retained, and this young female, called Jackie, has taken over an old camera nest with a new friend named Forest Service by Mr. B. We have no idea where Mr. B could be because he is also not tagged or ringed.

In 2017, Jackie and Mr. B mated, but Jackie didn't lay eggs. Since she was only 5 years old (determined by the pattern of feather coloring), it is possible that she was still too young.
But in 2018 Jackie laid eggs that hatched and were named Stormy and BBB. The BBB did not survive a severe 24-hour rainstorm and subsequent freezing temperatures. The chickens in this period (6–1 / 2 weeks of age) were too big to fit completely under their parents to stay dry, we believe he died of hypothermia.
Stormy survived. And he continued in world fame with the US Forest Service press releases, which were published by the media. When Stormy was almost 8 weeks old, he was ringed on each ankle. The team hired a specialized biologist with mountaineering training with federal and state permission. Stormy's identification ring is purple with the number JR1.

In 2019, the female laid two eggs, one pup survived, which was named Simba. Simby identification ring is blue ZR1. 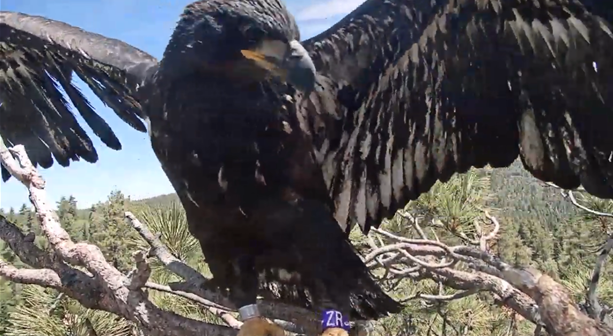 What kind of noise do I ever hear?
The camera is powered by solar energy and background noise charges the batteries during the day - it can be heard in the system, but it cannot be heard in the nest, so eagles cannot hear it.

What type of camera is used?
It is an outdoor protected camera for wildlife from Axis.

How was the camera installed?
A biologist - a climber - has been hired - someone who understands how to climb trees and install cameras without damaging the tree or its habitats. These special climbers must also have the federal and state permits needed to handle bald eagles as a federally protected and endangered species.

How high is the nest?
The nest is estimated to be about 36,5 meters high, very close to the top of the Jeffrey Pine.

Does the night light interrupt eagles?
No. This is infrared light that neither eagles nor humans see. Only a special camera lens can capture this frequency of light, allowing us to see the nest at night.

Is the couple together all their life?
Mostly yes, at least about 95% of the time. If a friend disappears for some reason, the second eagle finds a new friend. And there are documented cases of eagles that simply change friends without letting us know why it is.

Which eagle is female / male?
The bigger eagle is a female. In general, female bald eagles are larger than males. In addition to size, the eagles can be identified by identifying features such as beak, feather variations and the like.

How old are these eagles?
The age of the eagles can be determined up to the age of 5, as their feather color changes according to their approximate age. At the age of about 5 years they acquire a mature color (brown body, full white head and tail) and their age can no longer be determined.

This year the female Jackie has laid two eggs. The first egg was laid on 8.11, the second three days later on 11.1. Expected hatching is around Valentine's Day 14.2 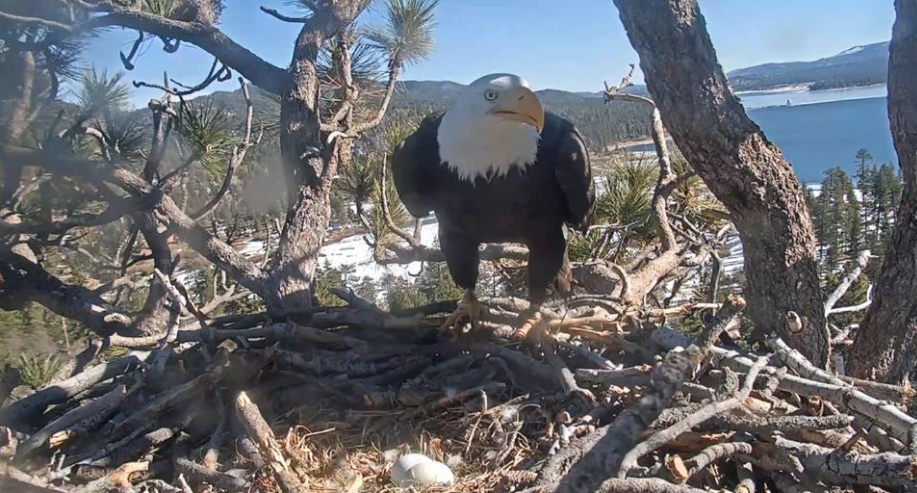 Both Shadow and Jackie are in the nest at dusk. Jackie starts laying egg # 1, releasing a few soft vocalizations, and finally pushes out the egg.


Egg No.2 and visits to flying squirrels