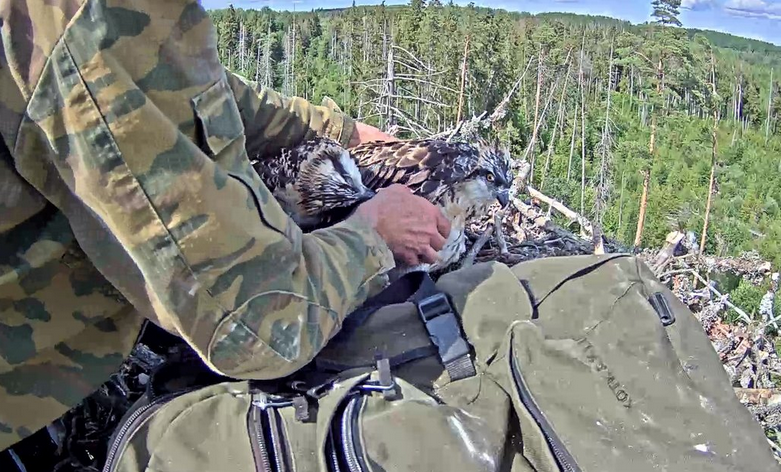 The nest is located in southern Estonia, Tartumaa, near a fish farm. Natural rivers and ponds are also nearby.
The resident male Ivo hatched and in 2013, Joosep Tuvi circled him in the 50 km NNE nest in Jõgeva County.
Female Irma was ringed as an adult bird, we know nothing about her ringing date.
This year, the female Irma did not return to her nest. Ivo thus nestled with a new female.

Osprey Riveris a medium-sized bird of the Osprey family. Reaches 55-58 centimeters. Wingspan is 145-170 centimeters. Orlovec lives mostly around the seashore, lakes and larger rivers. Its food consists of 99% fish that fish on the surface of the water. Osprey often take their nest from other birds of prey, which are located on the tallest trees. Both parents are sitting on eggs, but mainly females. The male feeds on the nest. Osprey sits on egg 35 to 41 days. Young Ospers fly out of the nest in 50 to 60 days.

Details about E301
E301 was circled in 2015 as one of two chicks in Emajõe-Suursoo, the Gunnar Sein Nature Reserve. It's about 40 km east of the kalakotkas2 nest. The Eagle remained practically at home… probably looking for a nesting area.

April 7 - Resident male Ivo (ED) is back on the nest