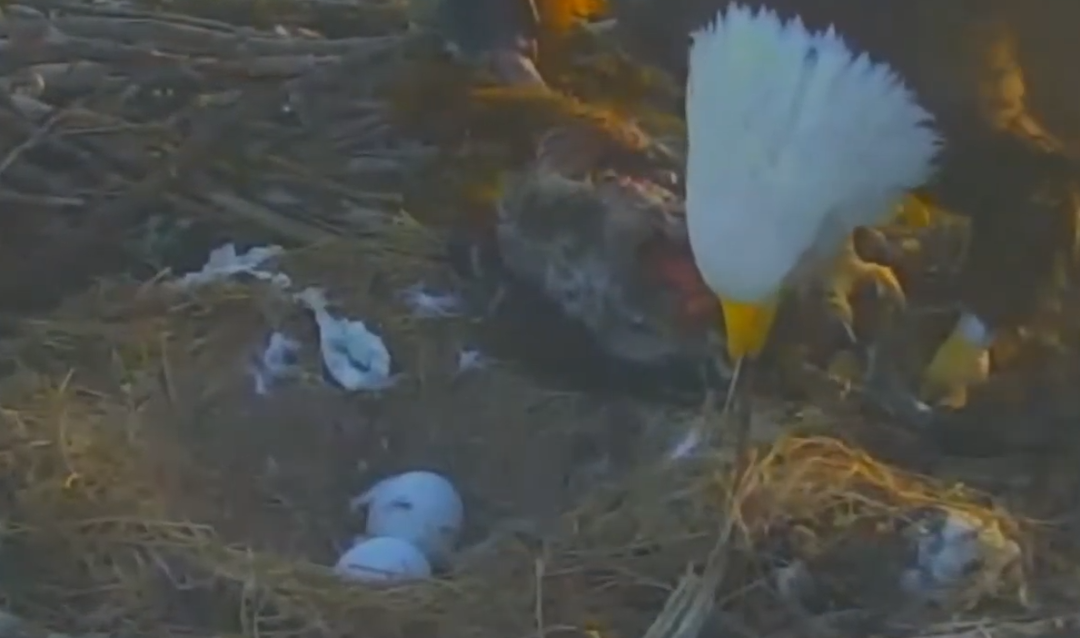 The 2021 nesting season did not start to develop well. The female Audacity laid the first egg in the season 2021 on February 1, then the transfer was interrupted, after its resumption on February 10 we observed three eggs in the nest. On February 12, two eggs broke.
The problem with the soft eggshell in the female has persisted for several years. In 2017, the female laid a total of 8 eggs - 4 eggs in each clutch, all cracked.
The soft eggshell problem can be caused by DDT or other contaminants. In order to determine the exact cause, ornithologists would have to capture the female for examination and blood collection for contaminant analysis. Which is not easy with adult eagles.

The bald eagle, a North American species with a historical range from Alaska and Canada to northern Mexico, is the success story of the Endangered Species Act. Forty years ago, most of the US national symbol was threatened with extinction. Destruction and degradation of natural habitats, illegal shooting and contamination of food sources, mainly due to DDT, have decimated the eagle population. The protection of habitats provided by the Endangered Species Act, the ban on DDT by the federal government, and conservation measures taken by the American public have helped bald eagles achieve a remarkable recovery.
The bald eagle is a North American species that has historically been found in the neighboring United States and Alaska. The largest North American populations are in Alaska and Canada, but there are also significant bald eagle populations in the Great Lakes states, Florida, the Pacific Northwest, the Greater Yellowstone region, and the Chesapeake Bay.
Adult bald eagles have a dark brown body and a distinctly white head and tail. In contrast, bald eagle cubs have spotted brown and white feathers. By gradually maturing, they acquire adult feathers, which takes about five years. Most bald eagles can nest at the age of 4 or 5, but many will start nesting later. The bald eagle lives 15-30 years in the wild. The oldest known bald eagle in the wild was at least 38 years old. In 2015, he was hit and killed by a car in New York.

The situation of the bald eagle

When America adopted the bald eagle as a national symbol in 1782, the country could have up to 100 nesting eagles. The first major loss of the species probably began in the mid to late 000th century, along with the loss of waterfowl, shorebirds and other prey. Although they eat fish and carcasses in the first place, bald eagles were considered invaders hunting chickens, lambs and domestic cattle. Subsequently, large predators were shot in an effort to eliminate the perceived threat. Along with the loss of the nesting environment, the population of the bald eagle decreased. In 19, Congress stated that the species was threatened with extinction and passed a law to protect the bald eagle, which forbade killing, selling or owning the species.

An amendment from 1962 added the bald eagle and a law was passed on the protection of the bald eagle and the bald eagle. Shortly after World War II, DDT was celebrated as a new pesticide for killing mosquitoes and other insects. However, DDT and its residues got into nearby watercourses, where it was absorbed by aquatic plants and fish. Bald eagles were poisoned by DDT while eating contaminated fish. The chemical impaired the birds' ability to produce strong shells. As a result, the eggshell was so thin that it often broke during incubation. DDT has also affected other species, such as peregrine falcons and brown pelicans.
In addition to the adverse effects of DDT, eagles died of lead poisoning while eating prey containing lead shot. By 1963, when only 487 nesting pairs of bald eagles remained, the species was in danger of extinction. Habitat loss, shooting and DDT poisoning contributed to the imminent demise of the national symbol.

When the danger of using DDT was discovered, thanks in large part to Rachel Carson's 1962 book Silent Spring, the Environmental Protection Agency took a historic and at the time controversial step in banning the use of DDT in the United States. It was 1972 and for the bald eagle it was the first step on the road to recovery.
Following the adoption of the Endangered Species Act of 1973, the service identified the species as endangered in 1978 in all the lower 48 states, with the exception of Michigan, Minnesota, Oregon, Washington and Wisconsin, where it was identified as less endangered.
The listing of endangered species provided a springboard for the service and its partners to accelerate the pace of recovery through captive breeding programs, reintroduction efforts, and the enforcement of nest protection rights during the breeding season.
In July 1995, the service announced that bald eagles in the bottom 48 states had recovered and were considered less endangered.
In July 1999, the service proposed removing the bald eagle from the list of endangered species. Since then, the service has reviewed the comments received on this proposal, along with new data and information, to determine the best ways to manage the species once it is removed from protection under the Endangered Species Act. In 2006, the service reopened the public comment period due to new information on the decommissioning proposal. The data collected during this commentary period were incorporated into the final decision on the status of the species. In 2006, the service estimated that there were at least 9 nesting pairs of bald eagles in the neighboring United States. The bald eagle has achieved a remarkable population recovery and has recovered to such an extent that it no longer needs the protection of the Endangered Species Act.

Although the service has removed the bald eagle from the list of endangered species under the Endangered Species Act, it is still protected by the Bird Migration Act and the Bald Eagle and Rock Eagle Act. Both laws prohibit the killing, sale or other damage of eagles, their nests or their eggs. The service continues to work with state nature conservation agencies to monitor the status of the bald eagle for five years after de-listing, as required by the Endangered Species Act. Should this species need protection under the law, the service can use it again as endangered. In the meantime, individual states may also adopt or implement laws to protect bald eagles. As part of the revision of the eagle rules from 2016, the service undertook a long-term plan to monitor bald eagles and bald eagles in order to determine appropriate values ​​for the issuance of permits. Provided sufficient adequate funding, the service plans to conduct eagle surveys on a 6-year rotation.

February 12 - When a male brings prey in the morning, a broken shell is seen. The other two eggs seemed fine. Later in the day, when Audacity gets up to turn both eggs, they look good… until they try to turn the left eggs, which are crushed.

A pair of bald eagles Harriet and M15 strengthen each other's bond and defend the area from uninvited visitors.

In the nest of bald eagles at Lake Dale Hollow, hatchlings hatch

Life in the wild can be brutal

The first flight of a young bald eagle DN12

The young eagle E15 is still in the area. Are Harriet and M15 building a new nest? - Videos