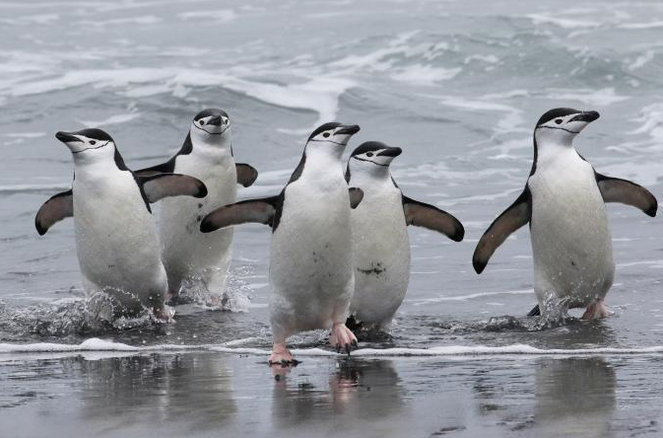 North of the Antarctic Peninsula is a small island covered with ice in the shape of an elephant's head. Every year, despite the brutal winds and rocky landscape of cliffs and glaciers, hundreds of thousands of chinstrap penguins nest here on these shores and create a living sea of ​​black and white feathers.

Introductory photo - Chinstrap penguins are returning to their colony at Stinker Point on the west coast of Elephant Island. Birds are named after the black strip under the chin.
Photo Noah Strycker

"They're like little climbers," says Noah Strycker, an ornithologist at Stony Brook University, New York. "In some places they climb up to 90 to 120 meters."
However, when Strycker and his colleagues spent 11 days counting penguin nests as part of a scientific survey this January, they found that tens of thousands of penguins were missing.
According to a preliminary survey of charismatic birds, temperature is likely to be the cause.
"Compared to the number of 50 years ago, we found a decrease of 56 percent of breeds of chinstrap penguins, which is somewhat shocking," says Strycker.
Given the distant location and difficult conditions, the last census of Chinstrap Penguins on Elephant Island was carried out in 1971, and this survey identified 123 nests. Strycker and his team found less than half of that.
While a recent expedition has not investigated the causes of such a sharp decline, other scientists have found connections to climate change, Strycker says.

For example, a 2016 study found that krill in some Antarctic seas has decreased by up to 40 percent over the past 80 years, probably due to water warming. Krill is the basis of the Antarctic food chain: Penguins feed on small invertebrates and fish.
Although it is a striking discovery, Strycker points out that the results are preliminary and not yet published in a scientific journal. He adds that Elephant Island is still teeming with tens of thousands of these charismatic birds, and that the International Union for Nature Conservation considers this species to be 'least endangered'. "Although," he adds, "this may change depending on the outcome of this expedition."

In order to count the slippery penguins on Elephant Island, you first need a vessel that can withstand the whims of the Antarctic seas. In this case, Strycker and his colleagues hosted the Greenpeace The Esperanza. But because the big ships can't get near the coast of Elephant Island, the crew had to change to the Zodiac inflatable boat and get to one of the several entry points to the reef. "We had to jump out of the boat and stick to the seaweed and then climb up the slippery rocks," Strycker adds.
In principle, scientists had to become penguins. Then the scientists split up each morning and spent the day counting penguin nests one by one.
One of the reasons why the expedition took place in January is that chick penguin pups are usually about a month old, which makes it much easier to count active nests.
"In the next few weeks, the young will begin to age and begin to cluster into large pile called" crèche "," Strycker says. "Then the census is a bit tricky."
Other scientists have also seen a decline in this species. P. Dee Boersma, a penguin expert in nature conservation at the University of Washington, studies penguins in Antarctica and once visited the island of Elephant as a naturalist on a tourist voyage. "And I was surprised to see how few penguins were there," he says. 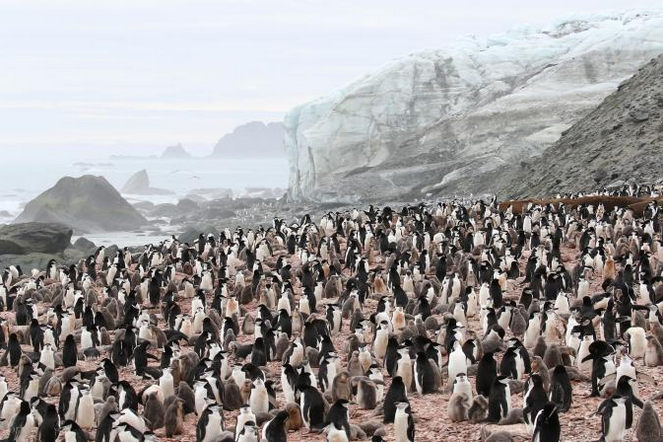 On the southern coast of Elephant Island, a colony of Chinstrap Penguins is gathered. The species is so far the most abundant penguin in Antarctica - for now.
Photo Noah Strycker

Boersma adds that there could be another impact of climate change on nesting: it is raining more often when Antarctica warms up - and rain is the killer of penguin pups. When young birds get wet, they often get cold and die. In fact, Boersma recorded an incident on the Argentine coast, where a large amount of rainfall killed half of the Magellanic Penguin pups he studied.
However, until these new data are published, and before more penguin population studies are conducted across a range of species, Boersma warns against excessive extrapolation from this single survey.
"We must look more closely at these populations."

Penguins are "our guardians of the oceans, and when you see changes in their population, people should pay attention to them."