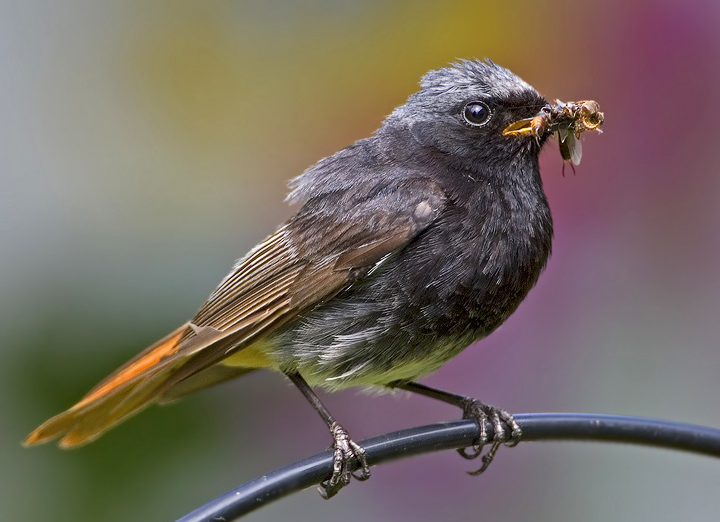 Rehek domestic is a small towing bird from the order of singers. People are often referred to as chimneys or blackheads.
Rehek domestic is slightly smaller than the domestic sparrow, it measures 14-15 cm in the 23-26 cm range and weighs 15-19 g. It is distinguishable from other small singers due to its distinctively bright orange tail, which is constantly vibrating. The male has a deep black, sometimes ashish color and a white spot on the wing. The female is less conspicuous, dark gray than male. The youngsters have initially dark gray feather feathers, later dark brown.
Rehek domestic nests throughout Europe and in large Asia. It is predominantly towed, stretching for the winter to southern and western Europe and Africa, from where it returns to Central Europe at the turn of March and April. Its original environment is rocky areas and stone quarries, but today it is also found in large numbers in towns and villages, less even in sparse forests. He lives in the Czech Republic until November, very rarely stays there all year round. It is still relatively abundant, nesting annually in the Czech Republic in the number of 200 000 - 400 000 pairs.
Outside the breeding season, it occurs separately. Its food consists of a variety of insects, spiders and berries.

Rehek builds a nest in the cavity of a building, or rocks from roots, stalks, moss and leaves, feathering with feathers and hairs. The female lays about five to ten light eggs, on which approximately 14 days are sown. After hatching the baby, the young feeds small insects. After the 12 to 14 days the cubs leave the nest and a few shortly afterwards builds a new habitation for a new snack.

The red-queue nide in direct

24.5. so the Spanish little ones already have "marking" behind them. There is the whole procedure on video, how it goes with such tiny pups. SUPER!

23.7. and there's a flush there, I see four beaks, that's the parents sting

Young rehums grow as if they were from water

In the rehearsals, youngsters start to play