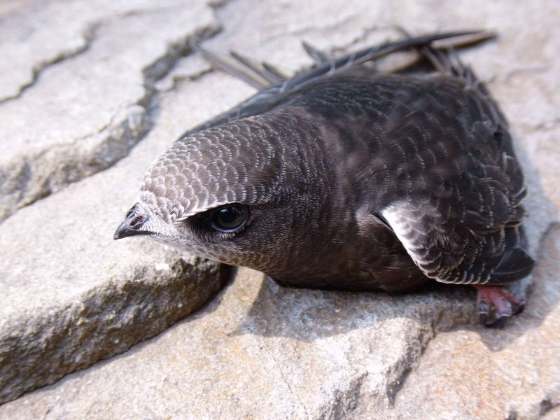 Camera occupying two booth boxes. Rorys is a small migratory bird, one of the best fighters. Besides the nesting season, she is constantly in the air, where she even sleeps, drinks, mates. He perfectly alternates a brisk flight with sailing, during which he takes a height of about one to two kilometers. During a flying flight, it drops into the micro-sleep, shuts off one half of the brain, the other controls the flight. The average flight speed is 35 km / h but can also reach 200 km / h.
It feeds mostly on flying insects. She arrives to us in April and May. He goes to winterfields in July and August.

Rorys originally nestled on the rocks and searched for the cavities of the trees. Currently he uses holes and slits in human constructions. Unfortunately, the current trend of building insulation threatens the rising population. Between 1898-2000 flights, the number of Prague rorys has decreased by 45%.

Black Stork - webcam from the nest

Unfortunately, YT also blocked the private broadcast. Somehow I don't have the nerve anymore and there's no way to call. Now I'm trying to broadcast purely privately, if they block it too.

I'm not surprised at all, Romane, lately it's been a disaster with YT.

Hello, where can I watch private broadcasts? I'm very sorry it doesn't work, the video always puts me in the mood!
Thanks for working with you

Hello Kryštof, unfortunately the transfer does not work, as soon as Roman adds it to YT, so they block it.

1.6 Camera does not drive

29.5 The first egg has been in the lower box since morning

Great! Thanks for the warning 🙂 I entered as a post on FB, so hopefully the transfer will continue to run fine.

So far, it looks like private broadcasting could work, so the existing link is: https://youtu.be/pkguUoc2lVI
Otherwise 25.5. the female laid a second egg in the first booth. So today I expect another. Nothing in the second booth yet.

Thanks Roman, the transfer went to Zoocam's page, so I fixed it, can I leave it at that? It occurred to me with the blocking… you have no description of the transmission, maybe it would like to add something in the style that the booths are located on private land in Ledeč nad Sázavou… I do not know if it will help, but maybe they block it because there is no description.

I do not think so. I had a description there, the same as in previous years, when it worked without problems. In my opinion, it will be done by some automaton that will have learned some elements from inappropriate videos using AI and finds nonsense there, so it would rather block it. As soon as I appeal, it doesn't matter what reason I give there, they will always unblock it immediately, only interrupting the live broadcast.

So YT is angry again and is blocking my broadcast. Since I don't know how to solve it, I try to broadcast in private. If it's OK, I'll put a private link here after a few days.
If someone thinks how to solve it, write a tip.

Hi Roman, Lately, YT has been blocking a lot of traffic. I have to fix a lot of cameras every day, I don't know what they're talking about. In any case, it is a pity, there should be a second egg and the female should also lay eggs in the lower box. Unfortunately, I can't advise you, I have no experience with broadcasting via YT.

Great, thanks for pointing Romane 🙂

Beautiful shots, I just don't know when the second rorys arrives in the booth, if they are friends or they argue at any moment

Thanks Roman for another camera! It is beautiful to see the lynx flying out of the booth 🙂

The camera occupies a piece of the garden, so I added a cutout with booths to the video. Above all, it was an attempt to circumvent the strange algorithm on YT. For 4 days in a row, he kept telling me that I was breaking the rules and blocked my broadcast. Unfortunately, it's obviously not controlled by people, but really just a machine. Every time I appealed, I was unblocked in a few hours, but the live broadcast was no longer going on, so I had to release a new one and they blocked it again, etc. all around. As soon as I added another camera to the broadcast, it's over and it's been running for quite some time. So I'm just praying it will last. And at least you can see what it really looks like from the outside :-)

The main thing is that it worked and the transmission is running 🙂 The booths are luxurious, I imagined them smaller and the roof overlap shades them beautifully. They already have nicely prepared basins, so we will probably see eggs soon.

16.5 Both couples for a night in booths

Unfortunately, there are some problems with YT and I still get meaningless warnings about breaking the rules. Probably the machine evaluates it and he doesn't like something about it. So hopefully it will be solved soon.

Oh yeah, already here…. Lately they canceled a lot of transmissions on YT. I'm holding my fists to solve this, it would be a shame to lose the transmission.

14.5. - 20:33 so even this year it's not without a fight, it looks like one of the pair cut off from the second booth and flew to the first, where a decent mela started

It was cruel, I hope without consequences, there is still only one in the lower booth at 22,59

It was without consequences. And it wasn't a rorys from the second booth either, because in the morning the second one flew into the second booth and there were all 4 of them.
The strange thing is that they fight so harshly and then in an hour they start to lick gently. They fought about 2 more times for two minutes, but then it was quiet all night.

So in the end it could easily have been the one from the second booth, now I really looked at it again and they flew in 2 in a row and started what was inside. So it is possible that they expelled him, but that it took them…

Well, it was a fight, they fought for over half an hour.

10.5. In the evening, 2 rorys arrived at the first booth and spent the night together

Great, that's a beautiful sight, one has moved and is looking at the camera at 21:56:16

10.5 Rorys also spent the night in the first booth

Just for info - before I managed to close the booths in front of the other birds this year, the starlings arrived and as they wanted to settle in them, they destroyed the glued basins of the rorys. So they will have to rebuild them this year.
Now at 10:45 it can be seen how the first lynx begins to glue the basin again. It's nice that they don't expect anything when they have so much to do with it.

Good morning in the club.
I see you noticed before I warned :-)
I remade the first camera into a new one, which fell out a lot last year. It wasn't until I finally found out that it wasn't a camera, but that 3 cameras didn't tighten my 100Mb network. Purchasing a 1Gb switch has solved the problem and there will be fewer outages this year. And the first camera should have a slightly better image. We'll see when the first visitor returns to it. I didn't want to give a link while I was doing the experiments.
Otherwise, the rorys flew into the booth for the first time in the morning of 8.5. and spent there about 2 hours and then sleeping. Today, for the first time, lynxes fly around the barracks a bit.
But this year they arrived again a while earlier, so I watched the first lynx on May 1.5. the morning.

Hello Roman, thank you very much. I have set up a YT alert to be transmitted from you, so I didn't expect it and added it right away. The transmission is beautifully clean. And I was already expecting the broadcast, in our Litoměřice region there are also lynxes from last weekend. Last year, starlings occupied a tit booth for us, and titmouse has not nested there since. It's great that the lynx started building a new basin right away, I hope they won't be in the fight booth like last year.

Hello Roman, what about rorys? Haven't they returned yet?

Although I watched everything, but I had no time to react to zoocam. Recent outages have been caused by a problematic Internet connection, but that's OK. Young guys are all out now, so I turn off the broadcast and see you again next year :-)

Romen, thank you very much for the transmission, there was again something to watch.

Hello, thank you for posting, we were supposed to orientate ourselves when to release our young-bred 5 weekly at home after dropping out of inaccessible beast. Do you have any instructions on the dimensions of the booth layout? Iva

Instructions are for example: http://peceoprirodu.cz/wp-content/uploads/2018/03/Vy%CC%81roba-ptac%CC%8Ci%CC%81ch-budek.pdf or http://www.rorysi.cz/rorysi/index.php?id=budky&what=samovyroba
But it also depends a lot where you want to place the booth so that it somehow "fits" there.
I wonder how you managed to feed the 5 for weeks?

Hello, thank you for the instructions for the booths. I consulted the rescue station for roryse education. We fed Roryse first after 20 minutes, then we extended the intervals up to 2-3 hours. He received chicken meat, liver and soaked cat granules. First he had to open his beak and put balls of food in his neck, later he opened the beak himself and finally took it from his hand. Occasionally I dripped him with a syringe of water, he also had water from the granules. At the end I drank myself from misticky. He had a nest in a paper box, lined with sheep with wool, a layer of paper on it. handkerchief. From the beginning, I covered him with wool, he was holly. By the end, he already had wings in a box, so - when we saw that "your" youngster flew out - we released him, so they threw him out the window in the attic and he immediately flew. And a few days later, all the local plans were gone. I still have to add that I have holidays, so I could feed the roryska :-)