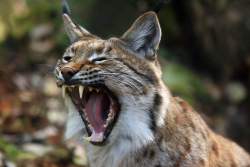 Rys red is a feline beast known to twelve different subspecies. In America it is considered a relatively abundant species.
In his homeland he is called bobcat according to a short tail.
Extension Area: South Canada, United States, and Mexico.
Typically, the XYYYY is years of life, 10 has spent the most in the wild. Sexually mature is two years of life. He has sharp eyesight and good smell, he can also climb very well. If necessary, he can swim, but the water avoids.

Length 0,65 - 1,1 meters, height about 40 cm, tail length 11 -19 cm and weight 5-15 kg (the largest representatives of the species live in the north). On average, the smallest member of the genus is the lynx.
The basic color varies according to the subspecies - it is yellow-brown or brown, brownish-red or grayish, always with spots, either on the whole body or just on the underside (the lightest are fur coats of desert features, the darkest features living in forests).
The tail is always light (unlike the Canadian feature) There are bright spots on the back of the ears. Ear straps are short, with long hair on the cheeks. She has a cuff on her face. The eyes are yellow, with a vertical pupil (characteristic of all small cats).
The hind legs are longer than the front. They have retractable claws.

It inhabits various environments, from the desert to the mixed and coniferous forests. Nor does it evade the suburbs; we can not find it only in steppes.
Its territory is branded, it is heavily territorial and reclusive. The size of the territory varies depending on the sex and the abundance of prey in the locality. To mark the territory, they use both urine and dirt, as well as marks on trees (scratched claws). Unlike other cats, the females are more opposed by females.
In the southern part of the area, the rabbits are predominantly in the East American region, and in the north, the hares are migratory. In addition, they feed on rodents, deer and carnivores. It's not a prey and easy to adapt. He is a night hunter. The hunt is usually done with twilight (in the north in the winter, however, it goes hunting and in the day when there is a potentially greater chance of catching the prey). Every night, the distance between 3 and 11 kilometers will be set.
The rats encounter the opposite sex only at the mating season that is in the winter. If more territories of males overlap with the territory of the males, they mate with all. The young (mostly 2-4) are born in the spring after about two months of gestation. They are blind and completely dependent on their mother. After a week, they look around, and after about eight weeks they start to eat solid food. At that time, the female again drives the males and they go hunting with them and help them feed the chicks. Independence occurs after about five months, but sometimes the youngsters stay with their mother until spring. At birth, the puppies are weighing about 300 grams, after the first year of life, they have more than 4,5 kilograms.

31.3. I'm not lucky with the angel, it's just a beautiful photo from the record sitting up there

thank you for the photos, the angel is very beautiful, he painted what I didn't see

2.12. I finally saw the kitten on the hunt, the rat didn't want to, so it had to be knocked out of the tube

22.11. the little girl is sunbathing, she seems to be used to it there

11.11. it's still raining heavily, the kitten has finally crept back in the house, it's wet enough