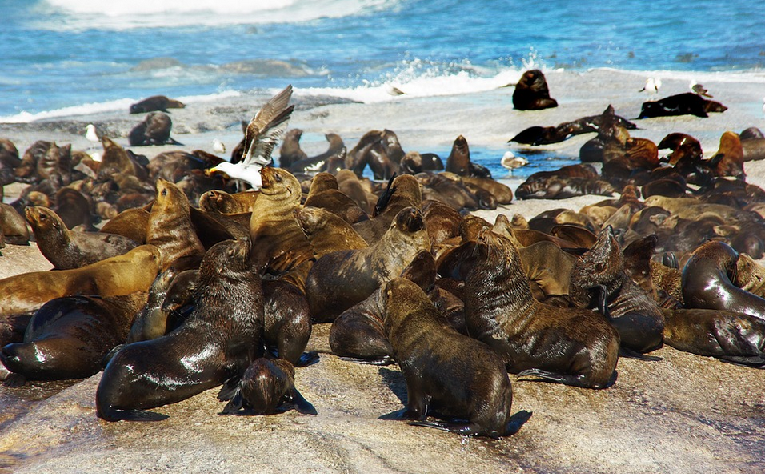 South African Sea Lion reaches the body length of 1,4-2,3 meter, the weight varies from 100 to 360 kilograms.
The homeland of this species is South Africa, also northeastern Australia, Tasmania, and islets in the Bass Strait; South African Sea Lion inhabits the coastline and the open ocean. Large colonies can be found on the coast and on rocky islets. The colonies also count several thousand individuals, where males defend their harem, which includes several females.
The mating season is November and December. Males fight for territory even before the females arrive. One baby is born and the female is pregnant 51 weeks. The fertilized egg does not develop about 4 months. The female feeds the baby for about a year. The cub cannot enter the water, because his coat is not protected and drowned. This period lasts about two months, staying in groups at pools, while mothers leave for a few days to feed. When small sea lions are able to swim, they rarely return to land. Unlike seals, sea lions have ears and a fin split.
They hold oxygen in their blood and save it in the water. She can hold her breath for half an hour. They float even at the depth of 200 m. Their nostrils and auricles can close. If it sinks, the heart rate drops from 150 to 10 per minute. They are characterized by great playfulness. They play, for example, with stones, which they bring out of the bottom, let go and catch them again. However, they can also attack humans in nature when defending their young.
He feeds primarily on fishing for sea fish and cephalopods. Life expectancy is 15-20 years, in human care to 30 years.