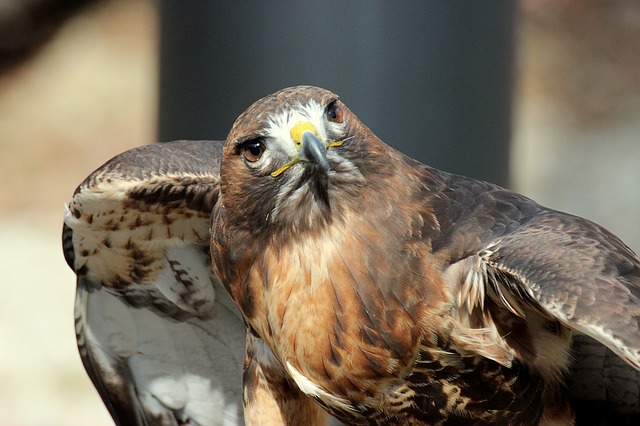 In 2014 on the third floor of the chimney of the geothermal heating plant on Benešovská Street at the height of 120 meters was installed a special box suitable for nesting a migratory falcon, which threatened complete eradication. In 2015, the kestrel was inhabited by a kestrel. In the spring of 2016 there appeared a pair of migratory falcons that carried 3 eggs.

The falcon falcon is a widespread falconic predator. The female is larger than the male and can reach the size of the raven. The color of the falcon is the most striking characteristic dark "beard" on the white face. They are predominantly birds to the size of the duck.

Sokol hunt exclusively birds in flight. The style of falcon hunting is not suitable for land prey, so it hunts small mammals hunting exceptionally. Birds on the ground try to force them to take off. Sokol plunges on the prey of high heights beneath him and attacks the prey with his claws. In the dive, it reaches up to 300 km / h. The impact at this speed would be dangerous for him, too, and he is trying to hit a wing rather than a prey body. For the same reason, he can not attack the flock, and some species of small birds are packed into a flock to defend themselves from the falcon. After the attack, the loot drops to the ground, where the falcon slaughters by claw if it survives.

One webcam from Falcon's nest in Děčín.

Hi Ivo,
feeding only to his own self, still small for the little tits he finds in the leaves, he still beeps, is already hungry, now is in Australia 6.57, 6.20 has been raining and she is still sitting on the chicks instead of getting up and going something to hunt, my mom is calling my dad for about half an hour to bring her something, but he's probably lost, or something happened to him, someone here wrote that he had hit a tree, mama always talkin to go get something to eat for kids, but somehow he can not say

Thank you for the info Dagmaro, I wrote that the male had hit the tree, it was still dark and he probably did not see it yet. It is true that probably two nights around the nest also did something because the female was restless. I'm sorry for a tiny eagle, but if the male does not return, it is possible that the female will feed only a bigger eagle due to lack of food

So finally, after 16, at the time of the time, a fish was brought, but who did it, but the bigger hungry, selfish, small just watched and cry