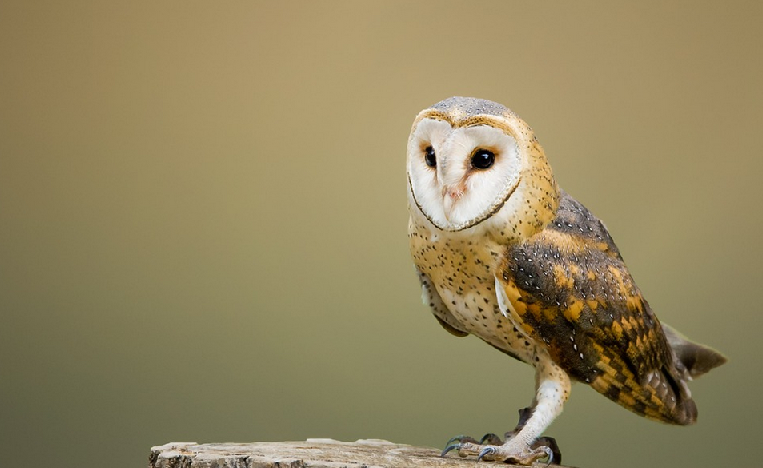 The barn owl is a night hunter with perfect hearing. It is noticeable especially due to the heart-shaped veil around the eyes. It is the most common species of owl on all continents. He hunts mainly at dusk and at night. The prey eats the whole, fur, feathers and other indigestible parts, as well as other owls, it gets rid of them by expelling them in the form of cone-shaped outbursts.

The barn owl produces permanent steam, which usually remains true to the nesting site. The flow begins in February or March, depending on climatic conditions, and both partners hear piercing hoarse screams during it.

The mortality of the barn owl in the first year of life is high and can reach up to 72%. The main cause of the decline of the barn owl is significant changes in the cultural agricultural landscape, leading to a lack of suitable nests and food. High mortality occurs regularly during severe snowy winters, to which it is more susceptible than other owls due to its lower ability to accumulate storage fat and poor insulating ability of plumage. Along with the increase in road traffic, the number of birds killed by vehicles is also increasing significantly.

We thank the operators of the webcam
http://www.siliconvalleynaturecam.com/barn_owls.html

27.1 Little owl Julie in the booth

10.6. In the booth of Romeo and Juliet's owl owl, the second-nest chicks hatch! Two are already in the world.

Hello
you should fix the illustration picture. What you have here is not a barn owl. They are also available for tracing (eg on pixabay https://pixabay.com/cs/photos/sova-p%C3%A1len%C3%A1-sova-pt%C3%A1k-sokolnictv%C3%AD-1208035/).

Hello, Thank you for your notification.

Only one cub survived here

8.3. 1,12 the smallest does not move, Julča arrived at 1,36 and unfortunately used it for feeding young, sad

Today, the last cub should be playing

There are 4 chicks at Julc

9: 25 deer on the outdoor camera at the booth

It's a shame they do not have the camera out of the booth alone, like it was last year.

The first cub is in the world.

Julie removed one egg, five eggs now in the nest

Today is 31 the day that Julie carried the first egg, the youngsters are slowly going to play here.

Fixed, transmission is already running. He has six eggs already from 27.1. see the comments below.