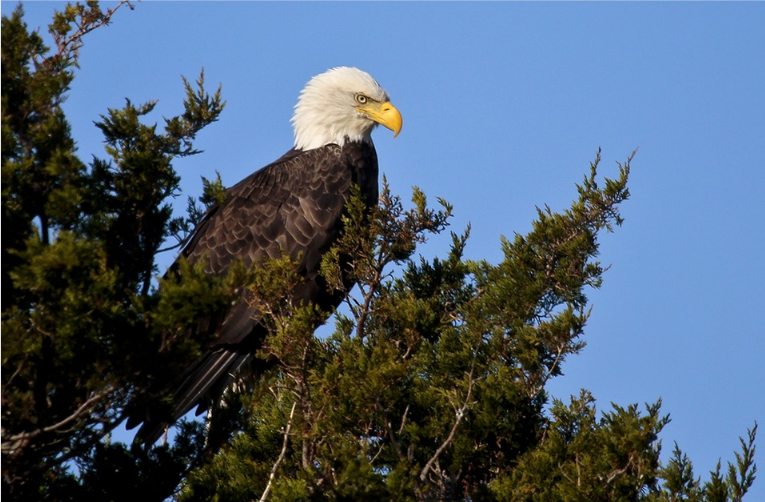 The non-profit organization Institute for Wildlife Studies installed the camera in the Bear Valley a few years ago.
They kept the camera and transmission without the eagles using this nest.

In the autumn of 2017, a young, inexperienced eagle couple began to appear here.

In 2017, Jackie and Mr. B took over the nest. In 2017, Jackie and Mr. B mated, but Jackie did not lay eggs. Given that she was only 5 years old (determined by her feather color pattern), she may have been too young.
But in 2018 Jackie laid eggs that hatched and were named Stormy and BBB. The BBB did not survive a severe 24-hour rainstorm and subsequent freezing temperatures. Stormy survived. When Stormy was almost 8 weeks old, he was ringed on each ankle. Stormy's identification ring is purple with the number JR1.
In 2019 the female laid two eggs, survived one chick named Simba. Simby identification ring is blue ZR1.
Nesting 2020
This year the female Jackie has laid two eggs. The first egg was laid on 8.11, the second three days later on 11.1. Expected hatching is around Valentine's Day 14.2

The Big Bear Lake is a reservoir
in San Bernardino Mountains, San Bernardino County,
in the state of California, USA.
The lake was named after the grizzly bears that were together
with indigenous peoples of the region.
It belongs to the Santa Ana River Basin. The surrounding area is a popular holiday destination.

PS There is already a video from YT 🙂
https://www.youtube.com/watch?v=nXJmmeQ5680

29.4. Today's activity of the industrious Shadow:

From the initial adjustments of the nest, through the laying of eggs to the breaking of the heart. From new beginnings again with the hope of a second clutch, a clutch of eggs and another broken heart. Jackie and Shadow persevered and will continue to do so in the years to come! Many thanks to the Friends of Big Bear Valley for giving us the opportunity to watch eagles in their natural habitat! ♥

27.4. Despite the bad weather and fate, they are both still working on the nest, wearing bedding and branches.

Wonderful video from April 23.4.2021, XNUMX - Jackie and Shadow in the evening together on the nest

22.4. Jackie and Shadow are in the nest again, tirelessly carrying branches and working.

PS It was Shadow, not Jackie.

19.4. The camera shows the surroundings of the nest https://www.youtube.com/watch?v=MTwlB7B959w

Hello Petro,
as I have been watching for some year, I have the impression that the water in the lake is declining. I also looked at the map and you can see how some places where the water used to reach, remained far from the water.

Hello Leon, you're right, the water in the lake is really running low. There has been a lot of drought lately. They also had to expand the boat dock, due to the depth of the water.

15.4. Today the presence of J + S on the nest from 13,45 to 15,52. First, Shadow brought a large branch and at 14,30 pm he brought a beautiful fish, then Jackie arrived and appropriated the catch. From 14,48:15,52 p.m., Shadow sat on an egg and Jackie sat on the "porch." At XNUMX they both flew away. (beautiful shots together, they are still attentive to each other, beautiful couple)