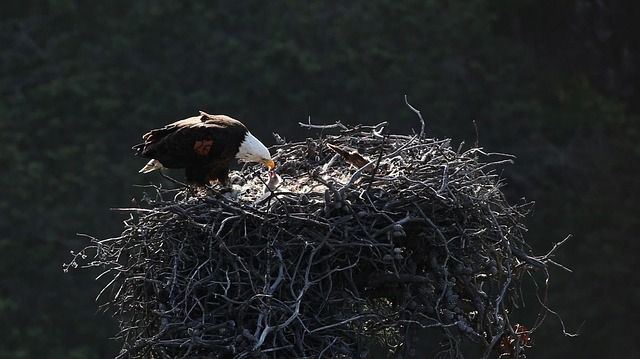 The female was carrying 2 eggs, both of them successfully hatched.

The female was carrying 2 eggs, but there was an intruder and the A-27 female left the nest, the male A-40 would not be able to incubate alone, the eggs destroyed the raven.

The new A-48 new female arrives.

Female A-48 carried the first 15 eggs, but was removed from the nest - unknown cause.

The second egg was carried by 16. March, but the unfortunate accident of the A-48 branches caused an egg to break.

Female A-48 carried one egg but was not viable.

The female was carrying 3 eggs, but unfortunately it did not lie, but two chicks A-62 and A-63 successfully hatched and fully developed, full feathering reached 30 May.

The 2016/2017 season was not successful for this nest. A total of eight eggs were laid in two clutches… all eight eggs cracked. Cause unknown.

The 2017 / 2018 season was successful for this nest. Eagle couple bred three cubs

Female Audacity A48 is slightly larger, ringed on the left leg.
Male How A40 is ringed on the right leg and has darker tail feathers.

5.5.2021/XNUMX/XNUMX Hello everyone! Who did not manage to watch the ringing on Sauces' nest last night, here is a record and video 🙂
https://www.zoocam.info/zapis/krouzkovani-na-hnizde-orlu-belohlavych-sauces/