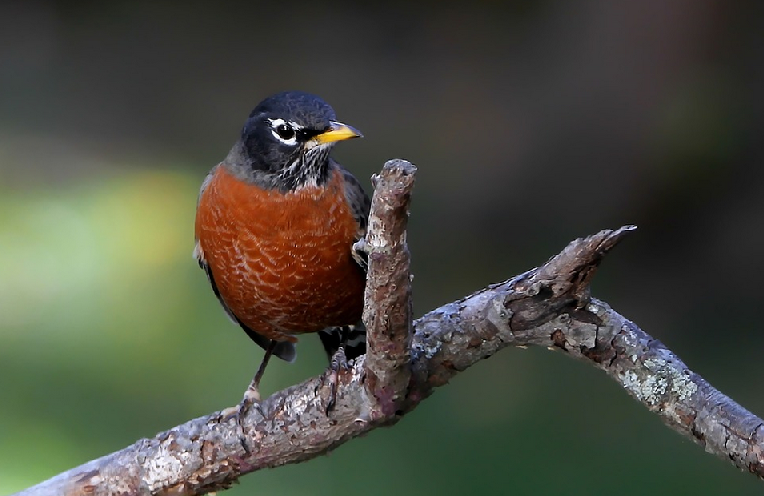 The nest is located on a private estate in Kansas, USA
The Robin Thrush is a medium sized songbird of the thrush family. It is also the most widespread and widespread North American thrush that occurs practically throughout its territory. It nestles in its northern part and stretches southwards from Canada to the center of Mexico for the winter.
It grows 25-28 cm, measures 31-41 cm in wingspan and reaches a weight of approximately 77 g. It is very markedly colored, all gray in height, head is black, except for a white strip around the eye and a bright spot under the otherwise orange tail, orange The color of the body is also its bottom. From here comes his English name - American Robin - which can be translated as American Robin and which was created by Eurasian Robin, whose chest also has a bright orange color. Both sexes are very similar, but females are generally lighter compared to males.
It inhabits forests, parks and gardens. It is active mainly during the day and roosts in numerous flocks. Invertebrates (eg beetles, caterpillars, earthworms), fruits and berries appear in his diet. He is also one of the earliest breeding species - the nest of grass, branches, paper and other materials he finds in his area begins to build right after his early return from the wintering grounds, and for solidification he wipes it with a layer of mud. The clutch size varies between 3-5 blue eggs. He is also known for his distinctive singing, which is beginning to sound early at dawn.

23.5. the last fourth chick left the nest on 22.4… now the nesting record is being released

19.5. young people fly out of the nest here soon

16.5. they are already training their wings

12.5. and now 4 pecks. that's what the parents are doing. It rains, they will be earthworms